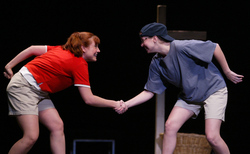 The one-hour show, geared to second through sixth graders, will be presented at 9:30 a.m. and 12:30 p.m. in W.M. Turner Auditorium of the Griffith Fine Arts Building, 2222 Alumni Dr. on the SFA campus.

ArtsPower's production is the first stage adaptation of Blume's book about Sheila Tubman, a young girl who faces a fear of dogs, swimming and spiders when she and her family leave their New York apartment for a summer in Tarrytown, New York.

Producing this show has been a tremendous experience," said Mark Blackman, who directs ArtsPower with his brother Gary. "(The result is) a musical that is highly entertaining but also portrays valuable lessons for everyone about what is really important in our lives, like family and overcoming our own fears."

"Seats are still available for both the 9:30 and 12:30 shows," said Diane Flynn, director of the Children's Performing Arts Series. "But we do expect a sell out, so I encourage teachers and parents to call and place their orders as soon as possible."

The Children's Performing Arts Series is presented by the SFA College of Fine Arts and is sponsored in part by Commercial Bank of Texas.