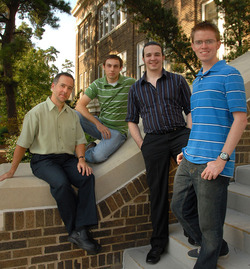 SFA Associate Professor Stephen Lias (left) and three of his students have all recently been honored for musical compositions they have written within the past year. Pictured with Lias, from left, are Lufkin senior Aden K. Ramsey, Lufkin graduate student Garry Wickliffe and Dallas sophomore Russell Cannon.

NACOGDOCHES, TEXAS - "Steak-worthy" is what Dr. Stephen Lias calls the most recent honors bestowed upon three of his composition students.

"At the beginning of each year, I announce that a victory steak awaits anyone who writes a piece of music that gets published, is selected for a national or international conference, or wins any amount of money or prize, including honorable mention," Lias said. "Lately I've been buying lots of steaks!"

One of those steaks goes to Lufkin graduate student Garry Wickliffe. He received his second award from the Association of Composers, Authors and Publishers for the compositions he completed in the last year, including the trailer for "Innocent's Way," a feature-length film now in pre-production; an SFA student's film; and collaborative work on "Skipping Tomorrow," SFA's 2008 feature-length film.

Lias explained that it is unusual for a student to receive any award from ASCAP; the fact that Garry has now received two before earning his master's is quite rare.

When letters of notification came in from the international project "60x60," Wickliffe and Dallas sophomore Russell Cannon informed their professor that more steak dinners were due.

Both students had submitted a 60-second composition to be considered for inclusion on one of the seven hour-long mixes the panel of judges puts together from the 1,000 or so world-wide entries. The mixes are then recorded and distributed throughout the world to be presented in concert-type settings.

Wickliffe's "The Z Relationship" and Cannon's "Musical Mechanics" were both selected for the "Evolution Mix" and "Midwest Mix," and Cannon's will be included on the "International Mix."

Cannon and Lias are traveling to New York to see the "International Mix" presented at the World Financial Center's Winter Garden Friday, Nov. 14. Each of the 60 compositions on the mix has been choreographed by a different choreographer, and the 60 dances will be performed as the compositions are played.

Cannon said he was shocked but quite pleased with the response to "Musical Mechanics." "I feel like I've done something that people can enjoy."

A third member of the composition studio, Aden Ramsey, was notified a few months ago that one of his compositions is being considered for inclusion in the International Society for Contemporary Music 2009 "World Music Days" performances. Lias has already treated the Lufkin senior to a steak for making it this far in the competition. If Ramsey's piece is selected, Lias will owe yet another steak.

Another milestone for Ramsey occurred while he was serving--under Lias--as assistant music director for the 2008 Texas Shakespeare Festival. Kevin Otis, the director of Shakespeare's "Twelfth Night," asked the student to write eight songs for the play.

"Having to compose the songs so quickly was a real eye-opener about what it takes to be a good composer, but it was a great experience," Ramsey said.

Perhaps at one of these upcoming steak dinners someone will pick up the tab for Lias' dinner. He, too, was recently notified that he has won his 10th ASCAP award for the body of work he produced this past year."

I am keenly aware of the importance of teaching by example, and so I make it a point to regularly send new works to competitions and attend important events in my field," said Lias. "My hope is that by seeing their professor active in these ways, the students acquire a deeper commitment to developing habits that will ensure their future success."