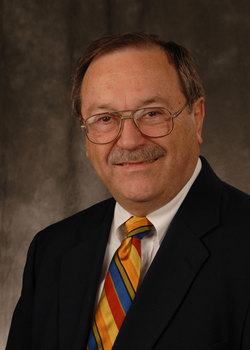 The professor responsible for preserving the history of Stephen F. Austin State University and placing historical markers on its campus will serve as the commencement speaker for the graduation ceremony at 9:30 a.m. Dec. 13 in William R. Johnson Coliseum. In addition to serving as professor of history, Dr. Jere Jackson is director of the Center for East Texas Studies and serves as the official university historian.

Jackson is a graduate of Longview High School and earned a Bachelor of Arts degree from Baylor University. His master's degree is from George Washington University, and he did post-graduate work at Oxford's Exeter College, at the Institute of Historical Research in London and at the University of Vienna in Austria. He earned a Ph.D. at the University of North Carolina. Despite his peripatetic spirit, he has remained on the SFA faculty since 1970.

"Both my wife and I are from East Texas pioneering families; Sarah is from Gilmer, and I grew up in Longview," he said. "We wanted to return to East Texas to be near our families."

Jackson began a study-abroad program at SFA in 1974, and he has given hundreds of SFA students and friends the opportunity to explore major cultural themes in the "open classroom of Europe."

"I pattern the trips on the Grand Tours of the 18th century," he said. "Many of the travelers have returned to travel with the group year after year."

In 1996, the SFA Board of Regents honored Jackson with a Regents Professorship. In addition, he has received the Teaching Excellence Award and the SFA Foundation's Outstanding Educator Award, and he is a former Professor of the Year.

Jackson served as chairman of the Nacogdoches County Historical Commission from 1976 to 2008 and wrote the historic overlay ordinances for Nacogdoches in the 1970s when he was a member of the city's first zoning board. He has received the Governor's Special Service Award in the field of historic preservation, a National Endowment for the Humanities Fellowship and the Texas Oral History Association's Award for African American History.

Sixteen historical markers have been placed on the SFA campus as a result of Jackson's efforts to tell the story of SFA, including four that will be placed in upcoming months as part of the university's 85th anniversary celebration.

"I served on the 60th and 75th anniversary committees, and I am now serving on the 85th anniversary committee," Jackson said. "History matters, if only to afford us opportunities for reflection. What we have done in the past matters, but only if we examine it thoroughly and honestly. Anniversaries allow us to look backward so we can plan forward rationally."

In addition to local and public history, Jackson has taught the history of Western Civilization, Modern Europe, World War I & II, Nazi Germany and the Holocaust. A history of SFA prepared by Jackson is available at www.sfasu.edu/story.