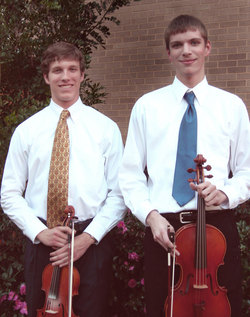 Parker Andrews, left, and Jason Williams, both students in the SFA Music Preparatory Division, recently earned placements in one of the three Texas All-State Orchestras.

NACOGDOCHES, TEXAS - Violinist Parker Andrews and violist Jason Williams, both students in the Music Preparatory Division of the Stephen F. Austin State University School of Music, are among the elite string players in Texas named to one of the three all-state orchestras.

Andrews, son of Reese and Carolyn Andrews of Nacogdoches, is one of 112 violinists who made the cut, and Williams, son of Patricia Williams and grandson of Gerald Latham, all of Lufkin, is one of 42 violists. Both are students of Dr. Jennifer Dalmas, SFA assistant professor of music.

Andrews, who was also named to the 2007 All-State Orchestra, began studying Suzuki violin through the Music Preparatory Division with Brenda Josephsen at the age of 5. He has been studying with Dalmas since 2003. Williams began working with Dalmas this past summer when he moved to Lufkin. Previously, he studied under Stanley J. Oakes at Pasadena Memorial High School.

A preliminary step to the all-state auditions is the competition for placement in the state's various All-Region orchestras. Thirteen of the 16 music preparatory division students who auditioned on Nov. 8 in Kilgore received placements.

Andrews will serve as first chair violin, or concertmaster, of the High School All-Region Orchestra. Other students of Dalmas, Rebecca Russell and Jason Williams, were placed as third chair violin and first chair viola, respectively.

The Music Preparatory Division offers group and private lessons in Suzuki violin or viola for ages 3 and up and private instruction in traditional violin, viola and cello for ages 7 and up, including adults.

Middle and high school string students may also participate in the Piney Woods Youth Orchestra, which was founded in 2004 by Raychev and Dalmas.

For information on the string program or any other musical instructions offered through the SFA Music Preparatory Division, visit http://www.music.sfasu.edu/camps_outreach/music_prep_division.html, e-mail Pat Barnett, division director, at pbarnett@sfasu.edu or call her at (936) 468-1291.