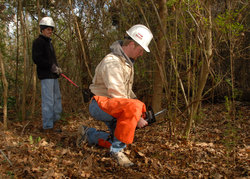 Stephen F. Austin State University horticulture students Bryan Deak of Nacogdoches, left, and Carnan Anderson of Bowie work to eradicate privet hedge from the university's Pineywood Native Plant Center. SFA recently received a grant from the U.S. Fish and Wildlife Service "Partners for Fish and Wildlife" program to fund the removal of the invasive exotic plant from China that was originally introduced into the southern United States as an ornamental plant useful for making a thick hedge. However, if not controlled, it can quickly smother out native plants in the landscape. More than 20 acres at the Pineywood Native Plant Center were recently cleared with machinery from Raven Environmental, a Texas-based company. Dr. David Creech, co-director of the center said, "Our goal is to be essentially free of this noxious pest in three to five years. Then we will be nurturing the native plants that emerge, as well as introducing native plants most likely to find the center an appropriate home."