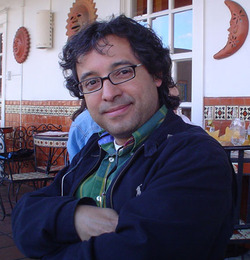 Ureña defended his dissertation, History and Poetic Structure of Hispanic Popular Song (The Case for Central America) in April and received his diploma Aug. 8. He will resume teaching Spanish and Latin American studies at SFA this fall.

"Juan Carlos Ureña is not just the first student to get a Ph.D. in Hispanic Studies, but also a first-rate scholar," said Eduardo Espina, professor of Hispanic Studies at Texas A&M and director of Ureña's dissertation.

"His first two articles as a Ph.D. in the field have been accepted by refereed publications, and his dissertation will be published as a book. For this reason, and also for his qualities as a human being, he is an example to follow for our Ph.D. students."

Throughout his time at Texas A&M, Ureña taught a full load of classes at SFA, commuting from Nacogdoches to College Station to work on his Ph.D. Now that he has completed his degree, Ureña is looking forward to "learning how to relax again."

"The Hispanic Studies program gave me a strong academic foundation in literature and Hispanic culture," Ureña said. "These areas are very important in my professional life, and combining my work as a musician with my work as a literary scholar has been a unique opportunity."

Ureña, also a performer, composer and songwriter, worked in music while living in his hometown of San José, Costa Rica, traveling to many countries to perform in concerts and music festivals. He has recorded 10 albums of original music and has contributed songs to numerous music collections in the United States, Latin America and Europe.

After studying music at the Universidad de Costa Rica, Ureña ventured to Texas and SFA where he completed his master's work in music composition. His wife, Jeana Paul-Ureña, is an associate professor of modern languages at SFA.

To preview samples of Ureña's music, visit his personal Web site at juancarlos.urena.com.