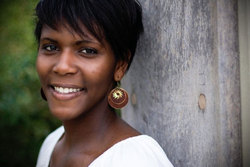 NACOGDOCHES, Texas - A recent service initiative in honor of Stephen F. Austin State University's 85th anniversary encourages students to reach out to those in the community who need a helping hand.

Stephenville senior Ashley Edwards was up for the challenge and has made a strong stand for local victims of domestic violence. The communications studies major says she was affected by the real stories of domestic abuse discussed in Jim Towns' crisis communications course, and decided to take action.

"These stories were not just stories. They were lives, people that were put in situations that jeopardized and later cost their lives," Edwards said. "I wondered, 'Why isn't anyone doing anything about this?'"

She soon made the decision to volunteer and later to intern with the East Texas Crisis Center, formerly the Women's Shelter. "(The experience) has drastically changed my perspective," she said. "I just want everyone to volunteer there and fall in love with these people."

She gave encouragement to victims of domestic violence, helping them focus on positive aspects of their lives and empowering them to take control. Although many of these victims had very painful lives, "they were some of the strongest ladies I've ever met," Edwards said.

Edwards was able to laugh and cry with many women and children who needed a place to turn and someone to talk to during hard times. "I got to help women who were told that they were nothing for so long remember that they are beautiful people," she said.

"They stood as living monuments and honored the lives of victims of domestic violence," Edwards said.

As the managing editor of the Pine Log, SFA's student newspaper, Edwards also was able to raise awareness of domestic violence through editorials and publicity for the event at the student center.

After graduation, Edwards plans to continue working for similar causes. "Shelters will always hold a place in my heart, so I will continually seek them out," Edwards said.

Volunteers for the shelter answer the 24-hour crisis hotline, plan activities for children and work with the advocates at the center. "Ninety percent of what we do is based on the support of our volunteers," said Joann Black, assistant director of the Family Crisis Center.

To those who want to volunteer and make a difference but feel they don't have the time, Edwards encourages people to actively seek out these opportunities and stay committed. Little things, like helping with paperwork, free up the staff to offer more services to those in need, Edwards said.

"If your heart is moved by an issue, you should do something about it," she said.

To find out more ways to get involved in the community, contact the SFA Involvement Center at (936) 468-6721 or visit www.sfasu.edu/studentlife/8to5.