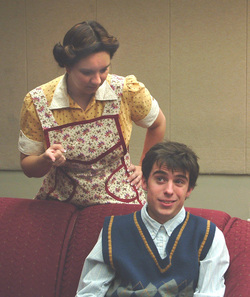 NACOGDOCHES, TEXAS - The actors have memorized their lines and movements, the crews have finished the two-story set and 1930s costumes, and the light and sound cues are set. All preparations are complete for the opening of the Stephen F. Austin State University School of Theatre's production of Neil Simon's "Brighton Beach Memoirs" at 7:30 p.m. Tuesday, Sept. 30, in W.M. Turner Auditorium.

Set in Brighton Beach, Brooklyn, in 1937, the plot revolves around the Jerome family--Jack, Kate and their two teenage sons--and Kate's widowed sister, Blanche, and her two teenage daughters.

Simon's realistic look at the interpersonal relationships among the characters and their various struggles results in "a hilarious work that finds that perfect balance between comedy and poignant drama," said Jason Zednick, Jacksonville senior who plays the family's patriarch, Jack.

Emily Womack, Katy senior who portrays Kate, said she especially likes the depth of the characters' relationships. "Even though these people hurt and disappoint each other, even though they may drive each other crazy, they have this unwavering and amazing love for each other that never stops."

"At the core of the play is the love of family," said Jessica Moore, San Antonio senior who plays Blanche. "Anyone who has a family can relate to one of the characters in the play."

W.M. Turner is located in the Griffith Fine Arts Building located at 2222 Alumni Dr. on the SFA campus.