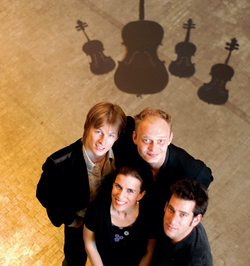 The Stephen F. Austin State University College of Fine Arts will present the world-renowned Hugo Wolf Quartett in concert at 7:30 p.m. Thursday, Oct. 23, in W.M. Turner Auditorium. The concert is a part of the 2008-2009 University Series.

NACOGDOCHES, TEXAS - The Hugo Wolf Quartett, touted as one of the most sought-after string quartets of its generation, will present a concert at 7:30 p.m. Thursday, Oct. 23, in W.M. Turner Auditorium as part of the Stephen F. Austin State University College of Fine Arts' 2008-2009 University Series.

Founded at the Vienna Conservatory, the ensemble performs a repertoire that spans from the late 18th century to the present day.

"In fact, the group's name was granted by the International Hugo Wolf Society of Vienna because the quartet's music, like that of the late Romantic composer Hugo Wolf, spans the great Viennese music tradition and its departure into the modern period," explained Dr. John W. Goodall, associate dean of the SFA College of Fine Arts.

"This promises to be an outstanding concert of fantastic music performed by world-class musicians," Goodall said. "We are delighted to be able to bring artists of this caliber to Nacogdoches."

The Hugo Wolf Quartett has concertized for over ten years in the prominent concert halls of cities such as Amsterdam, Berlin, Cologne, Brussels, London, New York, Munich, Zurich, Prague and Salzburg.

During the 2007-2008 season, the group embarked on two highly acclaimed tours of the United States, performing 25 concerts in prestigious chamber music series from coast to coast, which led to re-invitations and appearances for the 2008-2009 season in New York, Chicago, Boston and Washington, DC.

Prior to the concert, Dr. Jennifer Dalmas, SFA assistant professor of violin, will give a brief informative lecture about the evening's program at 7 p.m. in Griffith Gallery, across the hall from Turner Auditorium. The audience is invited back to the gallery immediately after the concert for a reception honoring the event's corporate sponsor, BancorpSouth, and to meet the musicians.

W.M. Turner Auditorium is located on the second floor of the Griffith Fine Arts Building, 2222 Alumni Dr. on the SFA campus.