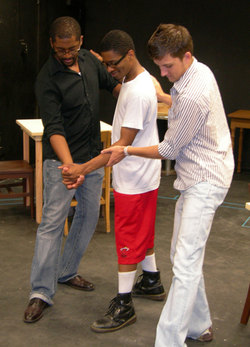 La Porte sophomore Eddie Edge (right) teaches Round Rock junior Waldron A. Archer (left) and Corpus Christi sophomore Kory Pullam (center) steps for a dance sequence in SFA School of Theatre's current production of Athol Fugard's "'Master Harold' . . . and the boys." The play, one of three included in the Summer Repertory season, will be presented for the last time at 7:30 p.m. Thursday, July 16, in the Downstage Theatre of the Griffith Fine Arts Building.

NACOGDOCHES, TEXAS - Even inexperienced theatre-goers can recognize that the dance sequences included in SFA School of Theatre's current productions of "Schoolhouse Rock Live! Too," "'Master Harold' . . . and the boys" and "Picnic" require the actors to memorize and practice the dance steps taught by the choreographer.

"But the dance steps themselves are probably the least important of all the things we work on with a cast," said Juanita Finkenberg, adjunct theatre faculty and choreographer for William Inge's "Picnic" and Athol Fugard's "'Master Harold' . . . and the boys."

"We sit through every rehearsal, taking notes on the actors' gestures, posture, even the way they handle their accessories or props," said Eddie Edge, La Porte sophomore who is involved with the choreography for all three shows. "All of this is important in conveying a character's personality and/or relationship to others."

For example, the two servants in Fugard's play have relaxed postures and open gestures when they are in each other's company, but once their young master, Hal, enters, they straighten up, often hold their hands behind their back and cast their eyes downward, Edge explained.

Similarly, the actresses in "Picnic" convey the social norms of women in 1950 by not sitting with their legs crossed in the presence of men and carrying their handbags over the forearm or by the handle.

In "Schoolhouse Rock Live! Too" the cast performs 20 musical numbers, but the dance steps and movements created by the show's four choreographers vary widely, fitting each song's individual style.

Finkenberg said it has been a privilege to work with this year's summer repertory company. "The acting is exceptional, the directing is wonderful and the designs are fantastic. I think this is one of the best summer seasons SFA has had."

"Picnic" will be presented two more times, at 7:30 p.m. on Tuesday, July 14, and Friday, July 17, in W.M. Turner Auditorium. Tickets are $12 for adults and $6 for seniors and students. Parental guidance is suggested.

"Schoolhouse Rock Live! Too" will be presented at 2 p.m. on Wednesday, July 15, and Saturday, July 18, in W.M. Turner Auditorium. All seats are $6 for this show.

"'Master Harold' . . . and the boys" will be presented for the last time at 7:30 p.m. Thursday, July 16, in the Downstage Theatre. Tickets are $12 for adults and $6 for seniors and students. It is recommended for mature audiences.