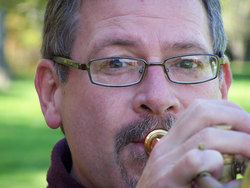 The Swingin' Aces, directed by SFA Assistant Professor Deb Scott, will open the concert with a variety of jazz selections, including "Katy," a ballad dedicated to Count Basie's wife, Katherine, and featuring Orange junior Kyle "Skippy" Castilaw on flugelhorn.

The Aces will also perform "Buy It and Fry It" by Denis DiBlasio and "Filthy McNasty" by Horace Silver.

The Swingin' Axes will open their part of the show with some of Count Basie's signature tunes, including "Magic Flea," "Jumpin' at the Woodside" and Billy Byers' arrangement of "All of Me."

"The real excitement will occur when Williams joins the band for some solo features," said Gary Wurtz, SFA associate professor of trumpet and the Swingin' Axes' director. "Since the Basie charts don't showcase Mike the way I want the audience to hear him, we are going to let him do his thing on some Doc Severinsen and Maynard Ferguson arrangements, like 'MacArthur Park,' 'Maria' and 'Begin the Beguine.' We are thrilled that Mike is able to join us for this concert."

Williams, an American jazz and big band trumpeter, has served as the lead trumpeter for the Count Basie Orchestra for more than 18 years. He can be heard on numerous Count Basie Orchestra recordings, including the recent "Basie is Back" and the Grammy-nominated "Ray Charles Sings, Basie Swings." As a member of the Basie Band, he has performed in all 50 states and 40 countries which such notable names as Dizzy Gillespie, Billy Eckstine, Frank Sinatra, Ella Fitzgerald, Sarah Vaughan, Tony Bennett and Diane Schuur.

A native of Shreveport, La., Williams attended the University of North Texas, where he was a member of the famous One O'Clock Lab Band. In addition to touring and recording with the Count Basie Orchestra, he also performs and records with other noted jazz groups, including the Magic City Orchestra, directed by pianist Ray Reach.

The concert is a joint presentation of the SFA College of Fine Arts and School of Music. W.M. Turner Auditorium is located in the Griffith Fine Arts Building, 2222 Alumni Dr.