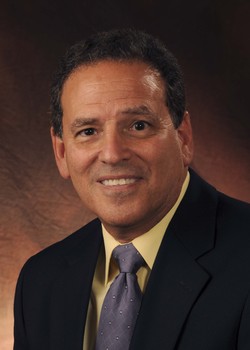 Dr. Mel E. Finkenberg, professor and chair of the Department of Kinesiology and Health Science at Stephen F. Austin State University, has been named interim dean of the James I. Perkins College of Education effective July 1.

Finkenberg, who joined the SFA faculty in 1989, is a past recipient of the SFA Alumni Association's Distinguished Professor Award and was honored with a Regents Professorship in 1997. He also was named the SFA Phi Delta Kappa Educator of the Year in 1995.

"I am delighted that Dr. Finkenberg agreed to accept this appointment," said Dr. Richard Berry, SFA provost and vice president for academic affairs. "He is well-respected across campus, and his leadership of the college will be skillful and strong. We are very fortunate to have him in this position."

"Dean (John) Jacobson is leaving the College of Education in wonderful shape, and this is a great opportunity to continue the progress in the direction he initiated for us," Finkenberg said. "We've got great a faculty and staff in place, and I'm looking forward to this new challenge."

Finkenberg is a past president of the Texas Association of Health, Physical Education, Recreation and Dance. He served as the 1999 TAHPERD Scholar and received the TAHPERD Honor Award. He is a former vice president of the physical education division of the Southern District American Alliance for Health, Physical Education, Recreation and Dance. He also was the recipient of the Southern District AAHPERD Honor Award in 2000 and the National Association for Physical Education in Higher Education Distinguished Administrator Award in 2001.

He served as vice president of NAPEHE in 1993. He received the Presidential Citation from Southern District AAHPERD in 2000. Dr. Finkenberg received TAHPERD's David K. Brace Award in 2003. He was elected president-elect of the National Association for Kinesiology and Physical Education in Higher Education in 2005. Finkenberg also received the Southern Connecticut State University 1997 Alumni Citation Award.

Dr. John E. Jacobson, outgoing dean of the SFA College of Education, has accepted the position of dean of the Teachers College at Ball State University in Muncie, Ind. A national search for the new dean of the college will begin in September.