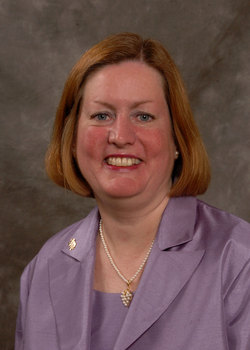 The three new members of the Stephen F. Austin State University Board of Regents appointed by Texas Gov. Rick Perry are very familiar with the campus.

Valerie E. Ertz of Dallas was reappointed to serve on the board for her second six-year term. The owner and president of VEE Services, Ertz has been a member of the board since 2003 and served as chair of the board in 2008.

"Mrs. Ertz has been very dedicated in her service as an SFA regent," said Dr. Baker Pattillo, SFA president. "She served on our strategic planning committee and has always been willing to drive to Nacogdoches to attend meetings and events. We appreciate the support she's given SFA, and we are very happy that she's been reappointed."

Ertz received a bachelor's degree from Southern Methodist University and a master's degree in management from Troy State University. She is a member of the Public Affairs Club and of the alumni associations of SFA and SMU.

Also appointed was SFA alumnus Scott Coleman of Houston. A dentist in private practice, Coleman received a bachelor's degree from SFA and graduated first in his class from the University of Texas at Houston with a doctorate in dental surgery. He is an Eagle Scout, a licensed pilot, and a member of the American Dental Association and the Academy of Cosmetic Dentistry.

Steve D. McCarty, retired athletics director at SFA, also was named to the board. McCarty is chair of the Alto Community Economic Development Council and a past member of the Northeast Texas Regional Mobility Authority, National Collegiate Athletic Association and the National Association of Collegiate Athletic Directors. He is a member of Masonic Lodge #2 and the Nacogdoches Rotary Club. He received a bachelor's degree and master's degree in education from SFA.

"We are thankful to the outgoing regents for the service they have provided to SFA and the state of Texas," Pattillo said. "Their dedicated support has been a great benefit to the university."