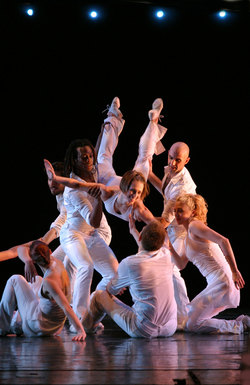 NACOGDOCHES, TEXAS - Parsons Dance, renowned as one of America's most successful contemporary dance companies, will bring its athleticism and artistry to W.M. Turner Auditorium at 7:30 p.m. Saturday, March 7, as part of the Stephen F. Austin State University College of Fine Arts' University Series.

The 11-member troupe tours nationally and internationally to packed houses, cheering ovations and rave reviews, explained John W. Goodall, associate dean of the College of Fine Arts. "We are looking forward to what promises to be an outstanding performance."

Since its founding in 1985, Parsons Dance has toured an average of 32 weeks per year, to a total of more than 235 cities, 30 countries, six continents and millions of audience members. The ensemble has also been featured on the PBS, Bravo, A&E Network and the Discovery Channel.

The New York-based company maintains a repertory of more than 70 works choreographed by founder David Parsons, 20 of which feature originally commissioned scores by leading composers and musicians, including Dave Matthews, Michael Gordon and Milton Nascimento.

Parsons, a former leading dancer with the Paul Taylor Dance Company, is the recipient of the 2000 Dance Magazine Award and the 2001 American Choreography Award. In addition to choreographing for Parsons Dance, he has received commissions from The American Ballet Theatre, New York City Ballet, Alvin Ailey American Dance Theater, the Spoleto Festival and Het Muziektheater in Amsterdam.

More information about Parsons and Parsons Dance is available at www.parsonsdance.org.

Prior to the concert, Elizabeth Rhodes, professor of dance at SFA, will give an informative talk at 7 p.m. in Griffith Gallery, across the hall from Turner Auditorium. The audience is invited back to the gallery after the concert for a reception honoring the event's corporate sponsor, Point A Media.