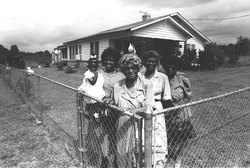 "Going to Church," a 1991 11 by 14 inch gelatin silver print by Nacogdoches native Richard Orton, is one of the artist's 30 photographs included in "The Upshaws of County Line" opening at 6 p.m. Saturday, Feb. 7, at The Cole Art Center @ The Old Opera House. Pictured are Leota Upshaw, her two oldest daughters, her cousin and her granddaughter on their way to the County Line Missionary Baptist Church for its annual homecoming service.

NACOGDOCHES, TEXAS - Photographs of a Nacogdoches County black community and a documentary about Hurricane Katrina will be the focus of activities at The Cole Art Center @ The Old Opera House beginning at 6 p.m. Saturday, Feb. 7.

"We are excited about both events," said Christian Cutler, SFA director of galleries. "From 6 to 8 p.m. we will celebrate the opening of 'The Upshaws of County Line,' a photography exhibition by Nacogdoches native Richard Orton. And at 7:30 p.m., we will present a free film-screening of the award-winning 'Trouble the Water.'"

The exhibition, hung in the upstairs hallway of the art center, consists of photographs Orton took at County Line, a black community west of Nacogdoches that began as a freedmen's community in the 1870s. Orton began photographing the community in the late 1980s.

The collection, which is on loan from the East Texas Research Center of SFA's Steen Library, is being exhibited in celebration of Black History Month and to raise awareness of the black culture and history in Nacogdoches and surrounding areas, explained Cutler. The exhibition will run through Feb. 28.

"Trouble the Water," which won the Grand Jury Prize at the 2008 Sundance Film Festival, tells the story of an aspiring rap artist and her streetwise husband who survive Katrina and then seize the chance for a new beginning. Directed and produced by "Fahrenheit 9/11" and "Bowling for Columbine" producers Tia Lessin and Carl Deal, it has been dubbed "astonishingly powerful," and "at once horrifying and exhilarating." Cutler rates it PG-13 for language.

The screening is a part of the SFA Friends of the Visual Arts independent film series and is sponsored by the SFA Department of Sociology.

The Cole Art Center is located at 329 E. Main St. in downtown Nacogdoches. Regular gallery hours are 12:30 to 5 p.m., Tuesday through Sunday, and admission is free. For more information on the exhibition or film, please call (936) 468-1131.