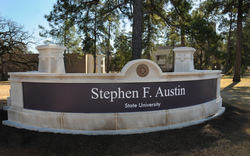 The new sign at the corner of North Street and East College is just the first in a series of improvements that will be made to the area of the Stephen F. Austin State University that is commonly referred to as "Birdwell Corner."

At a recent meeting, SFA regents discussed plans for the creation of Birdwell Plaza, which will include landscaping and other additions to create a park-like setting at the corner.

"This corner is the first impression many visitors have of the university," said Dr. Baker Pattillo, SFA president. "We want that impression to be a great one, and we also want to honor the university's first president, a visionary in Texas higher education who is credited with leading the university through the Great Depression."

Dr. Alton W. Birdwell moved to Nacogdoches with his family in 1922 and opened SFA the next year on his birthday, Sept. 18, in temporary quarters, including the Old University Building on Washington Square. SFA moved into the Austin Building on North Street in 1924.

"Dr. Birdwell oversaw additions to the campus, including the construction of the Rusk Building, which was a library at the time, and in the 1930s received Works Progress Administration funding to build two dormitories and a science building," said Dr. Jere Jackson, university historian. "That funding helped pull SFA out of the depression and enabled the students who had been living in boarding houses to move to campus."

Birdwell managed to convince the state to adjust its prohibition against employing married females in order to hire nationally known poet Karle Wilson Baker. He oversaw the creation of SFA's first graduate program in the late 1930s. He retired as president in 1942, was named President Emeritus and returned to teaching history on the campus. Shortly before his death in 1954, SFA regents announced that a building under construction on the northwest corner of campus would be named in Birdwell's honor.

"This building served an important function for SFA for more than 50 years, but it was constructed at a time when access for individuals with disabilities was not at the forefront in construction planning," Pattillo said. "The design became problematic for us, because the ground floor of the building comprised three different levels and was almost impossible to navigate for a person with a mobility impairment."

When a $16.6 million building was constructed in 2004 to house the Department of Human Services, the Texas Higher Education Coordinating Board required the demolition of the Birdwell Building in order to retain the university's balance of classroom square-footage space per number of enrolled students.

The official naming of the plaza in Birdwell's honor will be conducted when landscaping is complete.