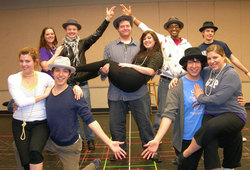 Members of SFA's Original Cast rehearse a scene from the musical revue, "You Don't Look a Day Over 80," which will be presented in the Downstage Theater at 7:30 p.m. Thursday, March 26, and Friday, March 27, and at 2 and 7:30 p.m. Saturday, March 28. Front row, from left, are Emma Palizza, David Hathway, Robert Meza and Arianna Bermudez. Back row, from left, are Sarah Zabinski, Flosi Ofeigsoon, Nate Reid, Caroline Harrell, Waldron Archer and Jason Zednick.

NACOGDOCHES, TEXAS - In celebration of the 85th anniversary of Stephen F. Austin State University's founding, the SFA School of Theatre's Original Cast will present a musical revue, "You Don't Look a Day Over 80," at 7:30 p.m. Thursday, March 26, through Saturday, March 28, plus a 2 p.m. Saturday matinee. All shows will be held in the Downstage Theatre of the Griffith Fine Arts Building on the SFA campus.

The 13 cast members will open the show with a short revue of songs and comic sketches on a variety of topics, but the longer second half is a musical portrait of the first 80 years of SFA's history, explained Dr. Alan Nielsen, SFA professor of theatre and the group's co-director.

The SFA portion is based largely on a similar revue Nielsen wrote for SFA's 70th anniversary in 1993. It includes historic photographs, reminiscences from SFA alumnae from 1924 to the 1980s, and period songs and dances.

"The show is a lot of fun," said Jacksonville senior Jason Zednick. "It contains a lot of funny stories and interesting historical tidbits, all intertwined with music from the 20s on up. Audiences of all ages will be entertained."

Rounding out the cast are sophomores Eddie Edge of LaPorte, Caroline Harrell of Athens, Robert Meza of Cypress and Emma Palizza of Houston. Also exchange students Danielle Easter of the United Kingdom, Flosi Jon Ofeigsoon of Iceland and Vikki Wilson of Scotland.

The Griffith Fine Arts Building is located at 2222 Alumni Dr.