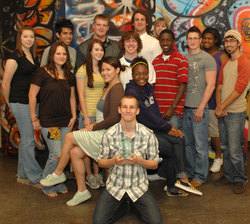 NACOGDOCHES, TEXAS - A semester's worth of work paid off for a group of Stephen F. Austin State University advertising students when they received third place among 30 teams at the recent District 10 American Advertising Federation's National Student Advertising Competition held in Houston.

"Just as a real advertising agency would do, the students researched the product, target market and competition, identified marketing/communication opportunities and developed traditional and non-traditional communication strategies," Prince said.

The students then made their presentation to a panel of communications professionals. The national competition begins with150 college and university teams in 15 district qualifying events. SFA is one of 30 schools who competed in District 10, one of the largest in the nation.

"Third place is a record achievement for SFA in this competition," Prince said. "Our district competition was the largest this year, allowing us to send both second place Texas Christian University and first place Texas Tech University to represent our district at nationals."

"The competition offers our students an opportunity for a real-world advertising experience," Prince continued. "Many top advertising agencies use this opportunity to recruit the ad industry's newest talent."

Other SFA faculty members who assisted the team were Linda Bond of the Division of Communication and Contemporary Culture; Marlene Kahla and Barbara Bierber-Hamby of the Department of Management, Marketing and International Business; and Peter Andrew of the School of Art.