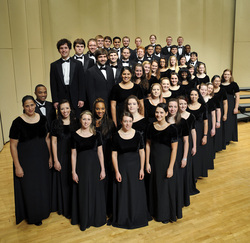 The SFA A Cappella Choir will present its fall concert at 7:30 p.m. Thursday, Oct. 29, in Cole Concert Hall, located in the Wright Music Building, 2210 Alumni Dr. on the SFA campus.

NACOGDOCHES, TEXAS - The A Cappella Choir of Stephen F. Austin State University will perform the world premiere of SFA alumnus John Dickson's "The Lord's Prayer" during its fall concert at 7:30 p.m. Thursday, Oct. 29, in Cole Concert Hall on the SFA campus.

Dickson, who is a Nacogdoches native, has an extensive list of film and television musical scores to his credit and is in world-wide demand, explained Tim King, SFA director of choral studies and the A Cappella Choir.

"I am delighted that Dr. King has chosen to program my composition on his October concert," wrote Dickson in a recent e-mail. "It is an honor to have SFA's fine A Cappella Choir perform its world premiere, and I can't wait to hear it."

Another highlight of the program that spans the musical scope of 400 years will be the performance of Randall Thompson's "Frostiana," which includes a set of seven poems by Robert Frost.

"Thompson is a stalwart of 20th century American choral music," King continued. "His impact on American music can be illustrated through two of his most notable students, Leonard Bernstein and Samuel Barber."

As SFA's top choral group, the 52-member A Cappella Choir has made several trips to Europe, including a 2009 tour of Italy where it performed in Venice, Florence and Vatican City and Rome.

In 2003, the choir participated in Vienna's 1,000th birthday celebration and in 2006 was invited by the Salzburg Choral Society to join in its celebration of Mozart's 250th birthday.