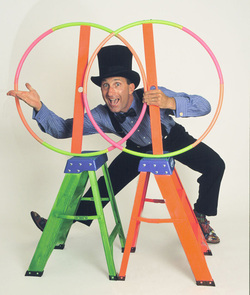 Garry Krinsky makes use of circus skills and original music as he explores scientific principles in "Garry Krinsky: Toying with Science," which he will present at 9:30 a.m. and 12:30 p.m. Tuesday, Oct. 27, in W.M. Turner Auditoium. The show is a presentation of the SFA College of Fine Arts' Children's Performing Arts Series.

Krinsky utilizes his experiences with the Boston Buffoons and a New England vaudeville troupe as he combines circus skills, mime, original music and audience involvement in the science show that was commissioned by and developed with the Museum of Science in Boston.

Since 1995, Krinsky has toured the show across the United States and Canada, receiving rave reviews along the way.

"Garry was very well received when he was last here in 2004," said Diane Flynn, director of the children's series. "The audience loved his energy and ability to make science fun."

"We already know of several large groups from area schools who will be attending, and we anticipate that both performances will sell out," Flynn continued. "I encourage teachers and parents to call now and place their orders."