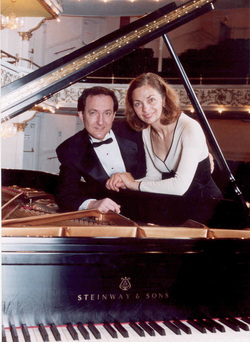 John and Jean Roberts will present "Music of Copland and Gershwin for Two Pianos" at 7:30 p.m. Tuesday, Sept. 22, in Cole Concert Hall on the SFA campus. John is the new director of the SFA School of Music, and his wife, Jean, is a member of the music faculty.

NACOGDOCHES, TEXAS - John Roberts, new director of the Stephen F. Austin State University School of Music, and his wife, Jean, will present "Music of Copland and Gershwin for Two Pianos" at 7:30 p.m. Tuesday, Sept. 22, in Cole Concert Hall on the SFA campus.

The couple, both of whom have degrees from the Eastman School of Music and Yale University, will perform three works by Aaron Copland during the first half of the program.

Copland's "Danzon Cubano," makes use of four melodically simple but rhythmically complex Cuban dances, and "El Salon Mexico" is a series of moods or impressions from Copland's visit to the dance hall known as Salon Mexico, John Roberts explained.

The duo will also perform Copland's "Billy the Kid," a six-movement suite extracted from the score for the ballet that is based on episodes in the life of the outlaw William Bonney.

The second half of the program will be devoted to George Gershwin's popular "An American in Paris," a work that was commissioned by the New York Philharmonic. The Roberts will perform Gershwin's original two-piano score which he later orchestrated.

Jean Roberts, who is now serving as adjunct faculty in the SFA School of Music, was a senior lecturer in the Townsend School of Music at Mercer University. She has also taught at Furman University and North Greenville College in S.C. and at the Western Australian Conservatorium of Music in Perth, Australia. She received her doctoral degree from the University of Texas at Austin.