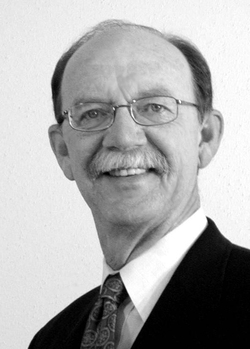 David Lee Lambert, will be inducted into the SFA Band Directors' Hall of Fame and guest conduct at SFA's "Concert in the Park" on Sunday, May 3, on the SFA campus.

NACOGDOCHES, TEXAS - David Lee Lambert, Stephen F. Austin State University alumnus and former assistant director of bands for the Nacogdoches Independent School District, will be recognized during the SFA bands' "Concert in the Park" on Sunday, May 3, as the 2009 inductee into the SFA Band Directors' Hall of Fame.

During the concert, Lambert will direct the SFA Wind Ensemble in Joseph Wagner's "Under the Double Eagle." The concert begins at 2 p.m. outside the Tom and Peggy Wright Music Building on the SFA campus. Admission is free.

Lambert, who is an active adjudicator, clinician and consultant, served as the concert band vice president for the Texas Music Adjudicators Association from 2003 to 2007 and is presently serving as president of that organization. He also serves as the executive secretary for Region 17 of the University Interscholastic League. He holds the same position in the Texas chapter of Phi Beta Mu, the international bandmasters fraternity, and is the immediate past-president of that organization.

"It is a pleasure to honor the career of David Lambert by inducting him into the Hall of Fame at SFA," said Fred J. Allen, SFA director of bands. "He is known throughout the state and beyond as a fine music educator and leader in our profession. Having him conduct the Wind Ensemble at the Concert in the Park gives us a chance to honor him publicly for all his fine work and loyalty to SFA."