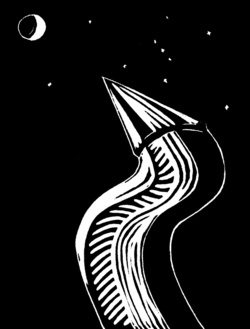 "Imagination," a linocut print from Don R. Schol's "Moonstruck" series is one of the pieces included in the "Burnley-Schol Studios" exhibition, which the SFA School of Art is presenting Oct. 9 through Dec. 5 at The Cole Art Center @ The Old Opera House in downtown Nacogdoches.

NACOGDOCHES, TEXAS - Linocut prints and drawings by Don R. Schol and paintings by Pam Burnley-Schol will be available for viewing in the Reavley Gallery of Stephen F. Austin State University's The Cole Art Center @ The Old Opera House beginning Friday, Oct. 9, as a part of the SFA School of Art's 2009-2010 Gallery Series.

"This is an intriguing exhibition by the artistic husband and wife team who work together as professors of art at the University of North Texas and as liturgical art consultants from their studios in Argyle," said Christian Cutler, SFA director of galleries.

Included in the exhibition is Schol's suite of prints, "Everyman, the #2 Pencil," in which he uses a standard pencil to represent the common man and woman on the street.

"Where sometimes it is problematic to pictorialize human behavior in a single frozen image, it has become possible and acceptable for me to use the 'Number 2 Pencil' as a surrogate for man and/or woman," Schol wrote in his 'Artist Statement.' "I seek to imbue the pencil with as much expression as possible without distorting it into an overly comical figure. I leave it to the viewer to decipher the message."

Each painting Burnley-Schol is including in the Nacogdoches show is an intricately crafted and tangible three-dimensional wooden object, gilded with 22 karat gold leaf and painted in oil pigment. Using her own digital photos of cloudscapes and landscapes, she examines the iconic possibilities for the space between the earth and sky, between the physical and the ethereal.

"Like the ancient tradition of orthodox icon painting, the modern snapshot has often been a sign or representation that stands for its object by virtue of a resemblance or analogy to it," Burnley-Schol wrote in her 'Artist Statement.' "I believe that ordinary things can become icons, windows revealing something greater than the thing itself."

A joint presentation of the SFA College of Fine Arts and School of Art, "Burnley-Schol Studios" is sponsored in part by the SFA Friends of the Visual Arts and Nacogdoches Junior Forum.

The exhibition will run through Saturday, Dec. 5, and the artists will be present for the 6 p.m. closing reception on Friday, Dec. 4.