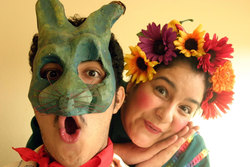 NACOGDOCHES, TEXAS - Tickets are still available for the bilingual children's show, "El Conejito Verde/The Green Rabbit," which will be presented at 9:30 a.m. and 12:30 p.m. Tuesday, May 5, in W.M. Turner Auditorium as part of the Stephen F. Austin State University Children's Performing Arts Series.

"This will be a great way to celebrate Cinco de Mayo as children in kindergarten through fifth grade learn an old Mexican folktale," said Diane Flynn, director of the children's series. "While English is the primary language used, the audience will be introduced to some Spanish vocabulary."

"El Conejito Verde" tells the story of a mischievous prince who learns the true meaning of love and loyalty after being transformed into a rabbit. The performers incorporate original music and engage the audience by having them help with the magic that moves the story along.

The Teatro de la Rosa Theatre Company, Fort Worth's only Hispanic theater company, is managed by Artes de la Rosa (formerly the Latin Arts Association of Fort Worth). The award-winning organization receives praise for its children's programming and critical acclaim for its productions.

"We are excited to be welcoming the company back to Turner Auditorium," said Flynn. "We've already sold tickets to many school groups, but we can still accommodate groups at both showings."