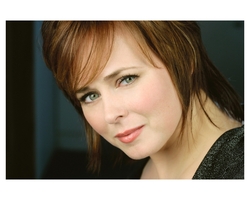 "Stylistically, the program is one of the most varied I have seen for a classical vocalist, with a strong emphasis on popular, accessible tunes," said Scott LaGraff, SFA assistant professor of voice.

The first half of Robinson's program includes Samuel Barber's "Hermit Songs," made famous by soprano Leontyne Price, and a set of Stephen Foster's songs, including "Beautiful Dreamer" and "Jeanie with the Light Brown Hair."

The program's second half includes romantic songs, a set of rag tunes that includes Scott Joplin's "The Maple Leaf Rag," and a set by Harold Arlen, who is perhaps best known for his songs from "The Wizard of Oz" film.

Robinson, who has consistently earned tremendous praise for her consummate musicianship, dramatic sensibility and ravishing vocal beauty, has appeared with many of the world's leading orchestras. Her 2009-2010 season includes performances of Alexander von Zemlinsky's "Lyric Symphony" with the Rotterdam Philharmonic, Beethoven's "Symphony No. 9" with the Cleveland Orchestra, Sergei Rachmaninoff's "The Bells" with the Nashville Symphony and Giuseppe Verdi's "Requiem" with the National Symphony Orchestra.

Early in her operatic career, Robinson won the 2002 Metropolitan Opera National Council Auditions, the 2001 Competizione dell' Opera in Dresden and the 2002 MacAllister Competition.

Through the years, the Louisiana native has won particular acclaim for her portrayal of Mozart heroines, said John W. Goodall, associate dean of the SFA College of Fine Arts. A sampling of her performances include Donna Anna in "Don Giovanni" for the New York City Opera and Florida Grand Opera, and the countess in "Le nozze de Figaro" for the New

Orleans Opera, Florida Grand Opera and the San Francisco Opera. This season, she will sing Fiordiligi in "Cosí fan tutte" for the Arizona Opera.