SFA to stage 'The Heidi Chronicles 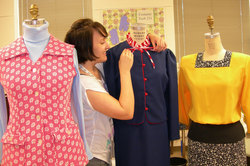 Schertz sophomore Bee Sturtevant, assistant costume designer for the SFA School of Theatre's upcoming production of "The Heidi Chronicles," make adjustments to one of the 60 costumes worn by 19 actors during the award-winning drama that follows the life of the lead character from 1965 to 1989.

NACOGDOCHES, TEXAS - Since the majority of Stephen F Austin State University theatre majors weren't even alive in the 1960s, '70s and '80s, the cast and crew of Wendy Wasserstein's "The Heidi Chronicles" are taking a crash course in the decades as they prepare for opening night.

The award-winning comedy, which chronicles the life of baby boomer Heidi Holland as she matures from a 16-year-old in 1965 to a 40-year-old art historian, will be presented at 7:30 p.m. nightly Tuesday, April 28, through Saturday, May 2, in W.M. Turner Auditorium.

Allison Ostrander, Plano junior who plays Heidi, said she knew the basics of each period before starting the show. "But the one thing I really got to know through rehearsals was the women's movement that was still going on up until the late 80s."

Sarah Zabinski, Clear Creek senior who plays Heidi's friend Susan, said one the challenges that comes from portraying a woman during those three decades centers on society's expectations. "Susan tries to be the ideal woman in every decade, to be who people expect her to be."

Texarkana junior Garrett Cross, who portrays Heidi's friend Peter, said he's gained a better understanding of the social development that occurred during the window of time between those decades. "Additionally, (the play) is replete with multiple historical references and should be doubly enjoyable for audience members who are familiar with the setting."

The play first premiered off-Broadway in 1988 but transferred to Broadway's Plymouth Theatre in March 1989. That year it won the Tony Award for Best Play, Pulitzer Prize for Drama, and Drama Desk Award for Outstanding New Play.

"The Heidi Chronicles" is a joint presentation of the SFA College of Fine Arts and School of Theatre as a part of the Mainstage Series. It is sponsored in part by Tipton Ford-Lincoln-Mercury and is recommended for mature audiences.