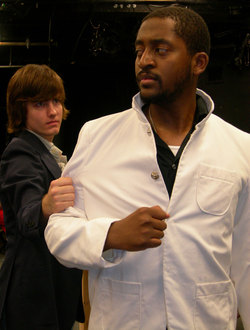 The intimate setting provided by the Downstage Theatre is perfect for Fugard's intense storyline about a white teenager in 1950 South Africa and two well loved black servants, explained Rick Jones, SFA associate professor of theatre and the play's director. "The close physical proximity the characters have to one another and to the audience concentrates their actions and emotions. The audience will definitely have a sense of 'being right there.'"

The largely autobiographical play by one of the leading civil rights activists in South Africa is more than just an indictment of apartheid, Jones continued. "It has relevance for today's audiences because prejudices still exist and we still need hope for a better tomorrow."

Jones regards the play, which received the 1982 Drama Desk Award for Outstanding New Play, as one of his favorites. "Theatre that makes you think about society and yourself-done the right way-is good theatre."

"This is one of the most cohesive groups with whom I've been associated in the theatre," Jones said. "We definitely have the right actors cast."

"'Master Harold' . . . and the boys" is one of three plays that will be shown in rotation throughout the three-week repertory season. In addition to the June 26 and 27 performances, "'Master Harold'" will be presented at 7:30 p.m. Tuesday, July 7; Friday, July 10; and Thursday, July 16. It is recommended for mature audiences.

William Inge's Pulitzer Prize-wining "Picnic" will be presented at 7:30 p.m. on Friday, July 3; Wednesday, July 8; Tuesday, July 14; and Friday, July 17; and at 2 p.m. on Saturday, July 4. All shows are in W.M. Turner Auditorium. Parental guidance is suggested.