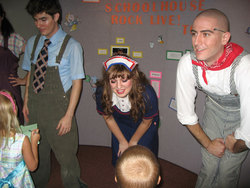 NACOGDOCHES, TEXAS - East Texans who wish to see any or all three of the theatrical productions included in Stephen F. Austin State University School of Theatre's Summer Repertory season still have two weeks to do so.

Each of the shows-Athol Fugard's "'Master Harold' . . . and the boys," William Inge's "Picnic," and the children's musical "Schoolhouse Rock Live! Too"-will be presented at least three more times before the season ends on Saturday, July 18.

"The shows are very different from one another," said Scott Shattuck, director of the SFA School of Theatre. "Fugard's poignant play depicts a crisis in the friendship between a white teenager and the black man that has nurtured him in Apartheid-era South Africa, while Inge's American classic transports us to a small Midwestern towns where three women's hearts are set aflutter by a handsome young drifter. And 'Schoolhouse Rock Live! Too' just rocks-its music and dancing are so catchy and clever that the kids in the audience don't even notice they're learning everything from multiplication to civics."

"'Master Harold' . . . and the boys" will be presented at 7:30 p.m. Tuesday, July 7; Friday, July 10; and Thursday, July 16; in the Downstage Theatre of the Griffith Fine Arts Building. It is recommended for mature audiences.