SFA's Orchestra of the Pines to present 'Inspirational Sounds' concert 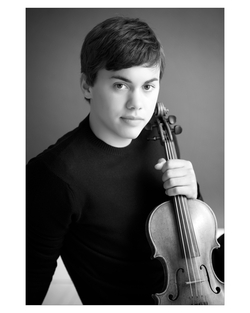 Guest violinist Benjamin Beilman will be the featured soloist during the SFA Orchestra of the Pines' concert at 7:30 p.m. Saturday, Oct. 3, in Cole Concert Hall on the SFA campus.

Beilman will perform Jean Sibelius' "Violin Concerto in D minor, Op. 47," the same piece he played to win the Schmidbauer Competition in January, which garnered him the appearance with the Orchestra of the Pines.

"The concerto is set beautifully with themes that are lyrical, haunting and mesmerizing," said Gene H. Moon, the Orchestra of the Pines' music director. "And Benjamin's virtuosity will truly be an inspiration to all who hear him."

The concert's title, "Inspirational Sounds," is also a reflection of the nature of the two other pieces the orchestra will be performing, according to Moon.

"Joseph Haydn's Symphony No. 26, 'Lamentatione' and Felix Mendeslssohn's Symphony No. 5, 'Reformation' both utilize musical material found in the church and its liturgy that can evoke inspiration and admiration," Moon continued. "Additionally, the audience may recognize the climactic fourth movement of Mendelssohn's Symphony that begins with 'A Mighty Fortress Is Our God.'"

A winner of Astral's 2009 National Auditions, 19-year-old Beilman was also awarded the Milka/Astral Violin Prize, designated for a violinist invited to join the Astral Artists roster. Beilman is a 2007 Presidential Scholar in the Arts and the recipient of a Gold Award in Music from the National Foundation for Advancement in the Arts.

Additionally, he received the First Prize at the 2009 Corpus Christi International Competition, won the Gold Medal at the 2007 Stulberg International String Competition and was the Grand Prize winner of the American String Teachers Association national solo competition. Beilman is currently a student of Ida Kavafian at the Curtis Institute of Music.

The "Inspirational Sounds" concert is a joint presentation of the SFA College of Fine Arts and School of Music and is sponsored in part by Nacogdoches Memorial Hospital and the Wedgeworth-Wright Edowment for the Arts.

Cole Concert Hall is located in the Tom and Peggy Wright Music Building, 2210 Alumni Dr. on the SFA campus.