SFA's The Original Cast to present 'Christmas at the Movies' 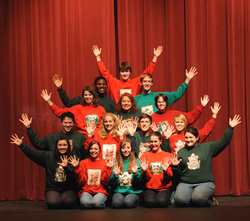 NACOGDOCHES, TEXAS - The Original Cast, a musical cabaret troupe from the Stephen F. Austin State University School of Theatre, will present four performances of "Christmas at the Movies" as part of the Nacogdoches Nine Flags Festival Friday, Dec. 4; Saturday, Dec. 5; and Sunday, Dec. 6.

Director Alan Nielsen, SFA professor of theatre, has combined songs and scenes from six decades of Hollywood films to create an original musical production suitable for the entire family.

"This year we are moving the shows from downtown to Turner Auditorium to accommodate larger crowds," said Nielsen. "And with Turner's stage facilities, we can also expand the scope of the show."

Tickets are $8 for adults and $5 for students or youth. Tickets may be purchased online at www.finearts.sfasu.edu or by calling the SFA Fine Arts Box Office at (936) 468-6407 or (888) 240-ARTS. Tickets may also be purchased at the Nacogdoches Convention and Visitors Bureau at 200 E. Main St.

"Christmas at the Movies" is a joint presentation of the SFA College of Fine Arts, School of Theatre and the Nine Flags Festival. It is sponsored in part by Regions Bank and Tipton Ford-Lincoln-Mercury.