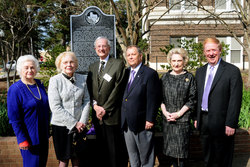 A historical marker honoring the contributions of Dr. Paul Lewis Boynton to Stephen F. Austin State University was dedicated Tuesday in the Founders Plaza between the Austin and Rusk buildings on the campus. Boynton served as SFA president from 1942 to 1958 and is remembered for his ingenuity in keeping the school open during World War II by convincing the federal government to open a Women's Army Corps school on the campus. When the war ended and enrollment surged, Boynton continued to lay the groundwork for the college's ascension to university status. Pictured are, from left, Joyce Swearingen, who served as editor of SFA's Stone Fort Yearbook when Boynton was president; Boynton's son and daughter-in-law, Dr. Edwin C. and Betty Boynton; Dr. Baker Pattillo, SFA president; Peggy Wedgeworth Wright, former chair of the Board of Regents; and Joe Max Green, chair of the Board of Regents.