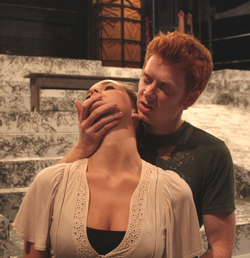 SFA students Zach Russell and Erla Brynjarsdottir, lead actors in the SFA School of Theatre's upcoming production of Georg Büchner's "Woyzeck," rehearse an intense scene. The play will be presented at 7:30 p.m. Tuesday, Oct. 6, through Saturday, Oct. 10, in W.M. Turner Auditorium. It is recommended for mature audiences.

NACOGDOCHES, TEXAS - Staging a theatrical production typically requires a collaborative effort among the director, actors, designers and production crew. However, SFA Associate Professor Rick Jones has reached beyond the regular pool of talent as he directs Georg Büchner's "Woyzeck."

The SFA School of Theatre will present the play that takes the audience inside the head of a poor soldier struggling to survive, hold on to his woman and keep his sanity at 7:30 p.m. Tuesday, Oct. 6, through Saturday, Oct. 10, in W.M. Turner Auditorium.

The starting point for most directors is a script, but no definitive script exists for "Woyzeck"-only various versions adapted from the non-sequenced scenes found long after the German playwright's death. So, Jones and two students-assistant director Miguel Maymí and dramaturg Marissa Harding-used two German versions and five accessible translations to write their own adaptation, consulting a German language expert from time to time to ensure accuracy.

Normally, the sets for SFA's Mainstage productions are created by an SFA faculty member, but since scenic designer Dana Gloege would not begin his appointment until late August and the scene shop needed to begin building as soon as school started, Jones called upon the talent of Richard Ellis, who also designed SFA's summer production of "'Master Harold'. . . and the boys."

The casting for "Woyzeck" is also unusual for the School of Theatre. Lead characters are typically played by undergraduate theatre majors, according to Jones, but business graduate student Zach Russell plays the title role, and Erla Brynjarsdotter, an exchange student from Iceland, plays Woyzeck's wife Marie.

Jones turned to SFA's School of Music for assistance with the songs that are included in the production.

"The script contains lyrics for drinking songs, folk songs and nursery rhymes, but no tunes," explained Jones. "So Tyler Hughes, a junior composition major from Killeen, wrote original music for us, and Dr. Deborah Dalton, SFA associate professor of voice, coached the actors on their singing."

"As usual, we brought in Juanita Finkenberg, our movement instructor, to choreograph the dancing, but she has also assisted in staging a violent scene between Woyzeck and Marie," Jones said. "We needed the scene to look realistic to the audience, but we also want to keep our actors safe."

For the same reason, Jones got permission from the SFA track team to use their high jump landing pit equipment.

"The School of Theatre has always been fortunate in receiving assistance from offices and departments across the campus, so my requests are not that unusual. This production is unique, though, in the number of collaborators it required," Jones said. "Audiences can see for themselves the results of our combined efforts."

"Woyzeck" is a joint presentation of the SFA College of Fine Arts and School of Theatre and is sponsored in part by Tipton Ford-Lincoln-Mercury. It is recommended for mature audiences.