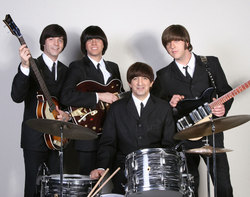 Single tickets for the Jan. 29 performance by Liverpool Legends, the "Ultimate Beatles Tribute Show," will go on sale through the SFA Fine Arts Box Office Monday, Aug. 17. Patrons can also purchase single tickets to any other of the events included in SFA's 2009-2010 University Series. Season ticket packages, which offer a 25 percent savings, are also still available.

Our outstanding line-up promises to be one of our most popular seasons yet," said Dr. John W. Goodall, associate dean of the College of Fine Arts. "Appropriately named 'The Ovation Season,' it will provide numerous opportunities for our patrons to applaud!"

The series will open Thursday, Sept. 17, with Twyla Robinson, an internationally acclaimed soprano who has performed with many of the world's leading orchestras and consistently earned praise for her musicianship, dramatic sensibility and vocal beauty, Goodall said.

On Thursday, Oct. 22, the Chamber Music Society of Lincoln Center will present "French Focus," a program highlighted by Olivier Messiaen's famous "Quartet for the End of Time." The piano, clarinet, violin and cello players will also perform works by French composers Maurice Ravel and Claude Debussy.

The "Great Russian Nutcracker" will be presented by Moscow Ballet on Thursday, Dec. 17, and again on Friday, Dec. 18. Goodall said they sold out two performances the last time Moscow presented this holiday classic, and they are anticipating an equally enthusiastic response this year.

Liverpool Legends, billed as the "Ultimate Beatles Tribute Show," will perform songs spanning the entire career of the Fab Four and on through their solo years on Friday, Jan. 29. The group's use of precise details will make the audience feel as though they're watching the real thing, according to Goodall.

From Tuesday, March 2, through Saturday, March 6, the SFA School of Theatre will present "A Raisin in the Sun," Lorraine Hansberry's Tony Award-winning drama about the dreams every member of the Younger household is struggling to attain in the 1950s in the South Side of Chicago.

American Ballet II will perform a varied repertoire rooted in classical ballet Tuesday, March 9. The 14 dancers (ages 16 to 20) are hand picked from around the world by the artistic staff of American Ballet Theatre.

Composer Marvin Hamlisch, best known for his award-winning scores for "A Chorus Line," "The Way We Were" and "The Sting," will present a program that combines his familiar with recently written compositions on Tuesday, March 23.

The SFA Schools of Music and Theatre will present one of the masterpieces of operatic literature, sung in English, Thursday, April 15, through Saturday, April 17. The title will be announced in the fall.

The 2009-2010 University Series will close with jazz trombonist Conrad Herwig on Thursday, April 29. The much sought-after musician whom jazz great Eddie Palmieri has called "the best trombonist on the planet" will share the stage with SFA's Swingin' Axes.

All concerts and staged productions on the University Series will begin at 7:30 p.m. in W.M. Turner Auditorium, and all seats are reserved. Tickets for the touring artists range from $35 to $17.50, with discounts available for seniors, students and youth. Tickets for presentations by the SFA School of Music or Theatre range from $18 to $6.

Season tickets, which offer about a 25 percent savings, are also still on sale and available in two options, said Diane Flynn, Box Office manager. "The classic package includes one ticket to each performance, and the TixMix package allows the patrons to create their own season. The cost ranges from $125 to $185, with discounts available for seniors, students, youth and SFA faculty and staff.

The "Great Russian Nutcracker" is not included in the season package, as it is this season's "Encore Event," Flynn explained. However, season subscribers can easily add this event to their order.