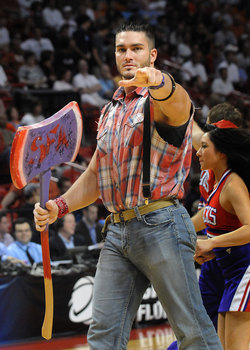 NACOGDOCHES, Texas-For the first time ever, the Stephen F. Austin State University men's basketball team clinched a spot in the NCAA tournament, placing SFA basketball in the national spotlight. As the fans anxiously watched the game on the court, one person was a standout on the sidelines-the SFA Lumberjack mascot, Steven Staines.

Between the buzzers, the Lumberjack was all the buzz. Suited up in his signature plaid shirt with cut-off sleeves and over-sized purple ax, the camera kept its focus on Staines. The NCAA commentators joked that being the Lumberjack mascot must be his side job and that surely he is a defensive end for the football team. (He's not.) Several Internet blogs were bubbling about Staines, with headlines reading "Big Bad Lumberjack," and bloggers calling him "easily the most intimidating mascot" in the NCAA tournament.

During the conference championship earlier this month, the UTSA Roadrunner mischievously taunted the Lumberjack and challenged him to a push-up contest. Staines playfully flexed his muscles and handily beat the mascot at one-handed push-ups. Double time. Even the opposing team's fans couldn't help but cheer him on.

"Being on the sidelines is so intense," Staines said. "I definitely get into the game and feel the emotion of it all."

While most mascots dress in cartoonish costumes and entertain the crowd with slapstick humor, Staines brings something different to the sidelines. "Most schools have mascots dressed up in a uniform, not a real person," he said. "I feel like fans can relate to me."

Staines became the SFA mascot in fall 2007, when some of his friends on the cheer squad suggested he join them in cheering on the Lumberjacks at a football game. Since then, he has been an integral part of the spirit team and participates in cheer competitions with the award-winning SFA co-ed squad.

It took a while for Staines to get used to his new role. "As I have gotten more well-known, I realize that my every move and action in public is being watched," he said. "It helps me to make good decisions and try to be a good influence for younger peers."

The Nambour, Australia, native moved to the United States with his missionary parents in the mid-'90s when they settled in Houston. When it came to choosing a college, nearby SFA was a good fit, and the senior is now studying health science and nutrition.

"My educational experience at SFA has been unforgettable," Staines said. "It hasn't been easy, but anything that is worthwhile doesn't come easily."

Staines also works hard to maintain his muscular lumberjack physique, exercising six days a week for about two hours a day. "It's a lifestyle," he said. "I've been working out since I was 15."

While his parents were missionaries, Staines experienced his fair share of travel and has visited places such as New Zealand, Hong Kong, Fiji and Scotland. He started a tradition of swimming in every ocean he visits and added the Atlantic Ocean off the coast of Florida to his list after the recent NCAA tournament appearance in Miami. On his next big trip, Staines plans to swim in the Mediterranean Sea.

With Staines wielding the ax, the SFA mascot has evolved from the scruffy woodsman of years past to a bigger, badder and brawnier lumberjack. He hopes the new breed of lumberjack icon will prevail when he passes the ax to his successor.

"It means a lot when the students of SFA are proud to have me, of all people, represent our school across the country," Staines said.