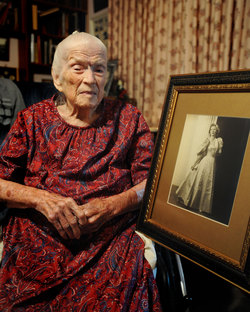 Anna Kathryn Holbrook, 92, sits near a photograph of herself wearing her great-grandmother Anna Raguet Irion's wedding gown during the 1936 Centennial celebration.

The grant from the Institute of Museum and Library Services will support conservation work on two mid-1800s wedding dresses that belonged to Anna Raguet Irion and her daughter Harriet Irion Taylor. Funding for the Anna Raguet Conservation Treatment Project will revitalize the delicate silk moiré gowns to prevent further loss and preserve them for future generations.

"This grant will support the Museum's educational mission by preserving the material culture of the region," said Carolyn Spears, Stone Fort Museum curator. "The artifacts tell their own story better than any interpretation, and that's why the American Heritage Preservation Grant from the IMLS is so important for museums working to preserve and restore objects for the present and future generations."

Once courted by Sam Houston, Anna Raguet was the daughter of Henry Raguet, a prominent Texas businessman. In 1840, she instead married Robert Irion, Houston's secretary of state for the Republic of Texas, and they raised five children. Their second child, Harriett, later married Lawrence Taylor, son of Charles Taylor, a signer of the Texas Declaration of Independence.

The wedding dresses were donated to the museum by Anna Kathryn Holbrook of Nacogdoches, granddaughter and great-granddaughter of the two women. Holbrook was the last descendant of the Taylor family to own the historic Durst-Taylor house, and her family includes many of Nacogdoches' early leaders. Throughout her life, Holbrook, 92, has accumulated a large collection of research records on Nacogdoches families, including her own.

After the treatment, the Anna Raguet Irion gown will be on display during the Stone Fort Museum's fall 2009 exhibit "Building a Community and Meaning of Leadership." Photographs of the Harriet Taylor dress also will be displayed to give visitors insight into the social activities of two women who are significant to Nacogdoches' rich history.

The preservation grants are used by small museums, libraries and archives to help preserve items such as works of art, artifacts and historical documents that are in need of conservation.