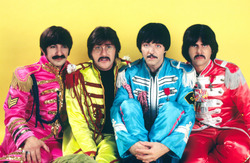 Billed as the "Ultimate Beatles Tribute Show," the concert will appeal to all ages, Flynn continued. "Whether the person on your list lived through Beatlemania himself, listened to his parents' or grandparents' albums, or has gained a recent appreciation for the group via the video game Beatles: Rock Band, he'll enjoy the concert!"

The musicians and actors who portray the Beatles were hand-picked by Louise Harrison, sister of the late George Harrison. With precise attention to detail, the four lads perform songs spanning the entire career of the Fab Four and on through their solo years.

The group has appeared on The Travel Channel's "Beatlemania Britain" and headlined "International Beatles Week" in Liverpool. In 2005, Liverpool Legends received national attention as they re-created The Beatles' 1966 concert at Busch Stadium in St. Louis.

The 7:30 p.m. performance in W.M. Turner Auditorium on the SFA campus is a part of the SFA College of Fine Arts' 2009-2010 University Series and is sponsored in part by BancorpSouth.

"Online orders can be made at any hour," Flynn said. "And the Box Office will be open 8 a.m. to 5 p.m., each weekday, through Wednesday, Dec. 23. We'll be happy to help you with your last-minute gift needs."