Tickets now on sale for SFA's 'Master Harold . . . and the boys,' 'Schoolhouse Rock Live! Too' and 'Picnic' 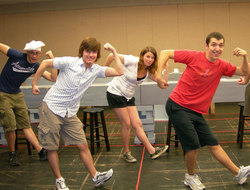 NACOGDOCHES, TEXAS - Tickets are now on sale for the Stephen F. Austin State University School of Theatre's summer repertory season that includes "'Master Harold' . . . and the boys," "Schoolhouse Rock Live! Too" and "Picnic."

"Our line-up of award-winning shows this season will appeal to a variety of audiences," said Diane J. Flynn, SFA Box Office manager. "Whether you're looking for something serious, romantic, or a fun children's musical, we've got it at a time that will fit your schedule."

"Set in 1950 South Africa, the story about a white teenager who's pretty much been raised by two black servants is more than simply an indictment of 'apartheid,'" said Rick Jones, SFA associate professor of theatre and the show's director. "Fugard finds the humanity-and the hope-behind the hatred."

The drama, which received the 1982 Drama Desk Award for Outstanding New Play, will be presented again on Saturday, June 27; Tuesday, July 7; Friday, July 10; and Thursday, July 16. It is recommended for mature audiences.

The entire family will enjoy "Schoolhouse Rock Live! Too," according to Alan Nielsen, SFA professor of theatre and the show's director. "In this 90-minute show, charismatic characters use what they've learned from the beloved '70s cartoon series, 'Schoolhouse Rock,' to save a run-down diner.

Rounding out the summer theatre season is William Inge's "Picnic," which takes place on a Labor Day weekend in the 1950s.

"The picnic, however, is merely a backdrop for the flurry of emotions and dreams that surface when a handsome vagabond suddenly enters the lives of three generations of women living side-by-side in a small Kansas town," said Allen Oster, SFA professor of theatre and the show's director.

The play, which received the Pulitzer Prize and Critic's Circle Award, will be presented at 7:30 p.m. on Friday, July 3; Wednesday, July 8; Tuesday, July 14; and Friday, July 17; and at 2 p.m. on Saturday, July 4. All shows are in W.M. Turner Auditorium. Parental guidance is suggested.