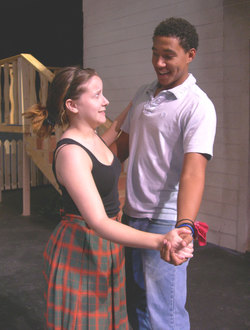 Katy junior Sammy Stanphill and Frisco senior Tony Douglas rehearse a scene from SFA's upcoming production of William Inge's "Picnic" in which drifter Hal Carter attempts to teach uneasy 16-year-old Millie Owens some dance steps. The drama is one of three shows being presented during SFA School of Theatre's 2009 Summer Repertory Season. For tickets or a complete schedule of shows, visit www.sfasu.edu/finearts or call (936) 468-6407 or (888) 240-ARTS.

NACOGDOCHES, TEXAS - Three casts, three sets, three directors, three shows all come together this week as the Stephen F. Austin State University School of Theatre's summer season gets into full swing with the opening of "Schoolhouse Rock Live! Too" on Tuesday, June 30, and William Inge's "Picnic" on Friday, July 3.

The 2009 Summer Repertory season officially began with the opening of "'Master Harold' . . . and the boys" on June 26 and 27 in the Downstage Theatre. The award-wining drama by Athol Fugard will be presented again Tuesday, July 7; Friday, July 10; and Thursday, July 16. The largely autobiographical play centers on the emotionally-charged relationship between a white teenager and two black servants in 1950 South Africa. It is recommended for mature audiences.

"Schoolhouse Rock Live! Too" is a great summer show for the entire family, said El Campo senior David Hathway, who plays Tom in the musical. "The fun and educational songs from the 1970s cartoon series are accompanied by energetic choreography, fun costumes and props, and even a light-up set. I enjoy each rehearsal and can't wait to present it to an audience!"

"We're starting the evening shows early for our young audience members," said Diane Flynn, Fine Arts Box Office manager. "And to make the outing affordable for the entire family, all seats are $6 for this production."

After each performance of "Schoolhouse Rock Live! Too," cast members will come out to the lobby to meet the audience.

"Picnic" offers another type of summer fun, according to Hathway, who portrays Alan in the Pulitzer Prize-winning play. "Full of summer heat and romance, it would make for a great romantic evening at the theatre."

Set in 1950, the play focuses on three generations of women living side-by-side in a small Kansas town and the handsome vagabond, Hal, who suddenly enters their life. Paul Newman made his film debut as Hal in the film version that was nominated for an Oscar as Best Picture.

The drama is only one of William Inge's well-known classics. He also penned "Come Back Little Sheba," "Bus Stop," "The Dark at the Top of the Stairs," and "Splendor in the Grass."