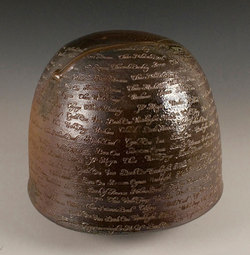 NACOGDOCHES, TEXAS - Works by two Stephen F. Austin State University graduate students and artists from Center and Lufkin will be included in "TEXAS NATIONAL 2009," an annual juried show created by the SFA School of Art that will open at 5 p.m. Saturday, April 4, at The Cole Art Center @ The Old Opera House, located at 329 E. Main St. in downtown Nacogdoches.

"Bank Companies," a ceramics piece by David Fortner, graduate student from San Andreas, Calif.; "Pelvis," a ceramics piece by Kira Kalondy, graduate student from Mexico; "Gateway to Eden," a photograph by Deborah Rankin-Wagner of Center; and "Alien Waiter," a wooden sculpture by William Ford of Lufkin, are among the 113 works selected for the exhibition.

"TEXAS NATIONAL" is celebrating its 15th year on the national scene, said Christian Cutler, SFA's director of galleries. The competition is open to all artists living and working in the United States and is juried each year by an internationally acclaimed artist. The exhibition, located in the Jack and Doris Ledbetter Gallery, will run through Sunday, May 17.

More than 350 artists from 39 states entered this year's competition. Works by 91 artists from 27 states were chosen for the exhibition, and cash prizes totaling $4,500 will be awarded to three artists.

Mel Chin, American conceptual artist, is serving as the juror for this year's event. He will give a gallery talk during the opening reception and announce the winners at 6 p.m. Running concurrently with "TEXAS NATIONAL 2009" upstairs in the Reavley Gallery will be Chin's first animated film, "9-11/9-11: A Tale of Two Cities. A Tragedy of Two Times."

A special screening of the film will be given at 4 p.m. Sunday, April 5, and Chin will deliver a public lecture on his work at 9:30 a.m. Monday, April 6, in SFA's Baker Pattillo Student Center Theater, 222 Vista Dr.

Regular hours for The Cole Art Center are 12:30 to 5 p.m., Tuesday through Sunday. Both "TEXAS NATIONAL 2009" and Chin's film are sponsored in part by Professor Emeritus John Daniel and Doris Daniel, Wachovia Securities, SFA Friends of the Visual Arts and Nacogdoches Junior Forum.