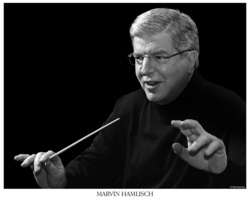 Award-winning composer Marvin Hamlisch, known around the world for his film scores, will present "An Evening with Marvin Hamlisch" at 7:30 p.m. Tuesday, March 23, in W.M. Turner Auditorium as part of the SFA College of Fine Arts' University Series.

NACOGDOCHES, TEXAS - The winner of every major entertainment award is coming to East Texas as the Stephen F. Austin State University College of Fine Arts presents "An Evening with Marvin Hamlisch" at 7:30 p.m. Tuesday, March 23, in W.M. Turner Auditorium.

The acclaimed composer, best known for his award-winning scores for "The Way We Were," "The Sting," and "The Chorus Line," will present an intimate program that combines his familiar songs with some of his more recently written compositions.

"We will be in the presence of genius," exclaimed John W. Goodall. associate dean of the College of Fine Arts. "Marvin's work has garnered him three Oscars, four Grammys, four Emmys, a Tony, three Golden Globes and the Pulitzer Prize!"

Other films for which Hamlisch wrote original compositions and/or musical adaptations include "Sophie's Choice," "Ordinary People," "Three Men and a Baby" and "Ice Castles." His latest effort, "The Informant!" starring Matt Damon, received nominations in the 2009 Best Original Score category from five separate entities, including the Golden Globes and the Chicago Film Critics Association.

He was the musical director and arranger of Barbra Streisand's 1994 concert tour and won two of his Emmys for the television special, "Barbra Streisand: The Concert."