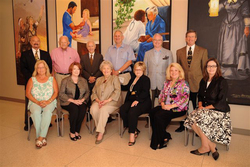 An advisory council created for Stephen F. Austin State University's Richard and Lucille DeWitt School of Nursing will provide direction regarding future plans for the school in order to meet the need for nurses in East Texas and throughout the state.

According to Dr. Glenda Walker, director of the school, the Advisory and Development Council will provide feedback and guidance in establishing priorities related to educational programs and community service.

"The Advisory and Development Council will focus on reviewing the school's current program, assisting in identifying new programs for the benefit of students, facilitating the school in achieving its strategic mission related to high quality education for students, assisting in placing students in meaningful internships, and actively pursuing financial development activities for the school," Walker said.

Current initiatives being addressed by the Advisory and Development Council include increasing enrollment, development of a master's program and development of a secure administrative infrastructure for the school, according to Walker.

SFA's nursing school has dramatically expanded during the past 10 years and in fall 2010 admitted 80 students. In prior years, the school could only admit 20 students each semester. The school is recognized as a leader in nursing education throughout the state.

"During the past year, the school of nursing has received commendations regarding its graduation and NCLEX rates from both the Texas Higher Education Coordinating Board and the Board of Nursing," Walker said. "In addition, the Ed and Gwen Cole Simulation Laboratory has been recognized as a Laerdal National Simulation Center of Excellence."

Walker said the expertise of the council members is varied and extensive and provides the nursing school with a broad base of wisdom. Members of the Advisory and Development Council include:

Bryan Krenek, advisory council chairman, is president/CEO of Memorial Health Systems of East Texas in Lufkin. He earned a bachelor's degree in psychology from Texas A&M University and a master's in healthcare administration from Trinity University in San Antonio. He is a member of the Lufkin Rotary Club and serves on the boards of Commercial Bank, Boys & Girls Club and the Angelina County Chamber of Commerce. He has been an active member of the Nacogdoches Chamber of Commerce.

Sam Smith, vice chairman of the advisory council, is CEO of Mercy Ships, an organization that gives hope and healing to the forgotten poor. He earned a bachelor's degree in management and marketing from SFA. He is a respected speaker and lecturer and has served as an executive for various apparel companies across the United States. Smith also serves on the advisory council of SFA's Nelson Rusche College of Business.

Lucille DeWitt is president of Tem-Kil, with her corporate office located in Nacogdoches. DeWitt and her late husband, Richard, donated 17 acres of prime real estate to SFA, specially allocated for the School of Nursing. Her contributions have made it possible for the DeWitt School of Nursing to function as one of the best nursing schools in the nation, Walker said.

Scott Christopher is trauma and cardiovascular coordinator at Nacogdoches Memorial Hospital. He earned degrees in accounting and nursing from SFA. Christopher is president of Texas Trauma Coordinator's Forum and director-at-large of the EMS, Trauma and Acute Care Foundation. He serves on the Governor's EMS and Trauma Advisory Council Trauma Systems Subcommittee and the Deep East Texas Regional Advisory Council for EMS/Trauma. He also is a provider and course instructor of Advanced Cardiac Life Support, Advanced Trauma Care for Nurses, Trauma Outcomes and Performance Improvement, and Emergency Nursing Pediatric Course.

Joe Max Green is regional chairman of BancorpSouth Insurance Services, Inc./Joe Max Green Insurance Concepts. He graduated from SFA and has served on the SFA Board of Regents. He served as chairman of the board in 2008. He is a member of the executive committee of Nacogdoches Economic Development Corporation and the Nacogdoches Rotary Club. He is past president of the Fredonia Hotel Corporation, Nacogdoches Booster Club, Jaycees and Piney Woods Country Club, and he is a former board member of the SFA University Foundation. He has received a number of distinguished awards for his service in the community and university.

Dr. Gina Haidinyak is an associate professor of nursing and assistant director of SFA's DeWitt School of Nursing. She has worked as a certified registered nurse anesthetist and has taught in both the criminal justice and nursing departments at SFA. She practiced law in Nacogdoches and served as assistant district attorney.

Tim Hayward is administrator/CEO of Nacogdoches Memorial Hospital, where he has worked for 29 years. Hayward has served as administrator for the past 10 years, and he also serves continuously in several community events and as a member of numerous boards throughout Nacogdoches County.

Jerry and Penny Payne are dedicated supporters of SFA's nursing school. Jerry Payne is a retired attorney, and the couple provides quality advice and experiences based on knowledge acquired during their successful business careers, Walker said.

Casey Robertson is CEO of Woodland Heights Medical Center in Lufkin. He graduated from Texas A&M and earned a Master of Science in healthcare administration from Trinity University. Robertson's expertise and leadership abilities will add greatly to the advisory council, Walker said.

A. L. Mangham is a faithful community leader and supporter of Nacogdoches County. He served in the Navy as a medical administrator, retiring in1964, has served as a regional director on the Nacogdoches Medical Center board from 1975 to present, served as mayor of Nacogdoches from 1975 to 1989, was president of Fredonia State Bank from 1966 to 1990, served on the city commission for 14 years, and has served on several appointments by the state government.

Stan Sisco is a graduate of Texas A&M and earned his master's degree from the Southwest School of Banking at Southern Methodist University. He is a member of the U.S. Army Reserve and is president of the Nacogdoches/Lufkin division of BancorpSouth. He has 34 years of experience in banking.

Dr. Rhonda Tubbe is administrator of The Surgery Center of Nacogdoches. She is an adjunct member of the DeWitt School of Nursing, with this position being supported by Nacogdoches Medical Center. Tubbe earned an associate degree from Angelina College and a bachelor's in nursing from Jacksonville University. Her master's degree in nursing and doctorate in healthcare administration are from University of Phoenix. Tubbe has played an active role in helping establish the Advisory and Development Council for the DeWitt School of Nursing.

Walker has been director of nursing at SFA for the past 17 years. Her bachelor's degree is from Troy State University in Alabama, and she received her master's and doctorate from the University of Alabama. Walker has more than 35 years experience in nursing and nursing education. She has served in administrative positions at Vanderbilt University, the University of North Dakota and at the UT Health Science Center in Houston. She has received two Texas Higher Education Coordinating Board grants that focused on identifying factors and interventions related to attrition of nursing students. Walker has more than 30 publications and has made presentations at the local, state and national levels. 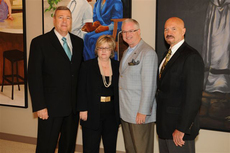