American classic, 'A Raisin in the Sun,' to open at SFA 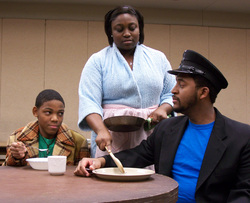 NACOGDOCHES, TEXAS - East Texans can experience one of America's classic dramas as the Stephen F. Austin State University College of Fine Arts and School of Theatre present Lorraine Hansberry's "A Raisin in the Sun" at 7:30 p.m. Tuesday, March 2, through Saturday, March 6, in W.M. Turner Auditorium.

While Hansberry initially had trouble convincing any Broadway theater to produce the work that focuses on the dreams of an African-American family living in the South Side of Chicago in the mid 1950s, its opening in the Ethel Barrymore Theater in 1959 led to the New York Drama Critics' Circle Award for best play and four Tony Award nominations.

The production was also significant because it was the first play written by a black woman to be produced on Broadway, and its director, Lloyd Richards, was the first black director on Broadway since the 1920s.

The play's title draws from Langston Hughes' poem "Harlem," in which he poses the question, "What happens to a dream deferred? / Does it dry up/ Like a raisin in the sun?"

The question of deferred dreams is only one of the many issues Hansberry raises with the drama, explained Allen Oster, SFA professor of theatre and the play's director. "She also deals with generational clashes, civil rights, women's rights and questions concerning identity, justice and moral responsibility."

Sharayah Reed, Red Oak sophomore who plays the family's matriarch, said she loves the play's straight forwardness. "It doesn't sweep issues under the rug; it says loud and clear what is right and wrong and takes away all grey areas."

Reed encouraged East Texans to come see the production she called "dynamic." "It will propel you to question your present state of comfort and change any aspect of your character that threatens progress."

Parental guidance for children under 13 is suggested.