Best-selling author to speak at SFA 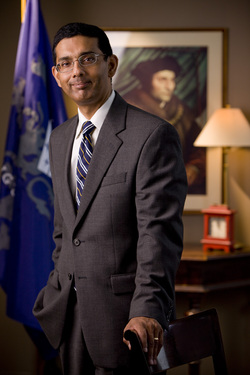 The Office of International Programs at Stephen F. Austin State University will host a lecture by best-selling author Dinesh D'Souza at 7 p.m. Wednesday, Nov. 10, in the Grand Ballroom of the Baker Pattillo Student Center.

The topic of D'Souza's speech is "Islam and Christianity Amidst International Turmoil: Is Religion to Blame?"

D'Souza recently was named president of King's College in New York City and continues to write best-selling books, tour the lecture circuit and participate in debates.

Prior to writing books, he was a study-abroad student from Bombay, India, who studied his senior year of high school in Arizona. He decided to stay in the United States and received his bachelor's degree from Dartmouth College in 1983.

Following his studies, D'Souza worked as senior domestic policy analyst in the Reagan administration from 1987 to 1989. Later, he worked at the American Enterprise Institute and then became a senior fellow at the Hoover Institution at Stanford University.

Investor's Business Daily has called D'Souza one of the top young public-policy makers in the country, and the New York Times named him one of America's most influential thinkers. The World Affairs Council also lists him as one of the nation's 500 leading authorities on international issues.

"We're pleased to host President D'Souza, and I think it's an excellent opportunity for students, faculty and staff, as well as members of the community, to learn more about a very serious and relevant topic," said Dr. Murali Venugopalan, director of the Office of International Programs at SFA.

"His books have had a major influence on public policy and opinion, and I encourage students especially to attend."

A question-and-answer session and book signing will be held following the lecture. A reception also will follow at Hotel Fredonia in Nacogdoches. The event is sponsored by the SFA Office of the Provost, College of Liberal and Applied Arts, Department of Government, Office of Student Affairs, International Student Association, Multicultural Center, Barnes & Noble bookstore and Hotel Fredonia.