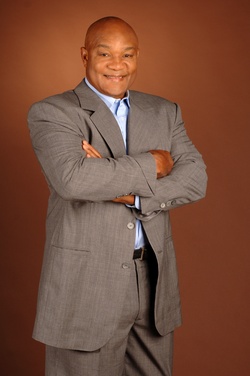 "A Conversation with George Foreman: Reflections on My America" is the first event in the new speaker series named for longtime SFA history professor Dr. Archie McDonald. It will be held at 7:30 p.m. Thursday, April 29, in the Grand Ballroom of the Baker Pattillo Student Center at SFA.

The new speaker series is designed to honor and preserve McDonald's legacy as a distinguished scholar, educator and community commentator. A prominent national figure will be hosted annually at SFA to discuss contemporary cultural issues - from politics to art - in the tradition of McDonald's writings and oral presentations.

"George Foreman is a perfect example of someone who has both been molded by and impacted our unique American culture," McDonald said. "He had a very rough life starting out, but he overcame his many disadvantages and became a citizen of the world in a very real sense of the term."

Foreman was born in the East Texas town of Marshall in 1949, but the impoverished youth had become a mugger and brawler on the hard streets of Houston's notorious Fifth Ward by age 15. He later attended the Lyndon Johnson's Job Corps program, which helped troubled kids. He eventually traveled to California where a counselor encouraged him to become a boxer, and he went on to become the heavyweight champion in 1973 after knocking out the great Joe Frazier in what was HBO Boxing's first-ever broadcast.

A born-again Christian, Foreman is an ordained minister who continues to preach to his Houston congregation every Sunday. He founded the George Foreman Youth and Community Center, a non-denominational refuge for kids who need direction just as he once did. He returned to boxing in 1987 and continued to win fights well into his 40s, becoming the oldest fighter ever to win the heavyweight crown at age 44.

By the time Foreman retired from boxing in 1999, he was well on his way to another career as a successful businessman. He has made millions from his infomercials marketing the George Foreman Lean Mean Grilling Machine. His other business interests include a line of environmentally safe cleaning products, a prescription shoe for diabetics and a restaurant franchise called UFood Grille.

"George Foreman is a true gentleman and a beautiful person who literally smiles all the time," McDonald said. "I look forward to taking a retrospective journey with him through his captivating life and career and learning what his expectations are for the future of our country."

McDonald has taught history at SFA for 45 years and served as director of the East Texas Historical Association and editor of the association's journal for 37 years. He is a past president of the Texas State Historical Association, past vice chair of the Texas Historical Commission and author/editor of more than 20 books on historical topics. Along with teaching, McDonald currently serves as the university/community liaison and is a weekly commentator on National Public Radio.

Limited premier reservations are available for $50, which includes dinner with Foreman at 6 p.m. Reserved seats are $15, and general admission is $10. Tickets may be purchased online or locally at the Nacogdoches County Chamber of Commerce, Nacogdoches Convention & Visitors Bureau and Citizens 1st Bank.

SFA students will be admitted free of charge, but tickets must be picked up in advance in the Student Involvement Center located in the BPSC.

A silent auction will begin at 5:30 p.m. outside Regents Suites A and B in the BPSC. Items to be auctioned include a pair of boxing gloves and books autographed by Foreman and gift certificates to local businesses. To make reservations or obtain more information about the speaker series, visit www.sfasu.edu/archie or call (936) 468-2385.