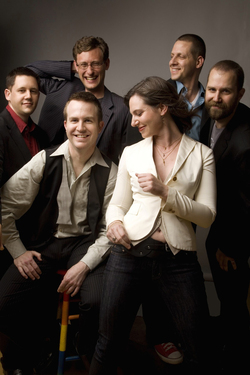 NACOGDOCHES, TEXAS - "Everyone who's seen them regards them as amazing" is what SFA Professor of Composition Stephen Lias said about eighth blackbird, the instrumental sextet who will be performing its highly kinetic program, "The Only Moving Thing," at 7:30 p.m. Tuesday, Oct. 26, in W.M. Turner Auditorium. The concert is a part of the Stephen F. Austin State University College of Fine Arts' 2010-2011 University Series.

Lias and others who are familiar with the Grammy Award-winning ensemble are astounded and excited that SFA was fortunate enough to book the group that the professor said has "literally exploded onto the contemporary music scene in the last year and a half."

"For many years there has been the presumption that performers had to choose between playing challenging, contemporary pieces and playing music that audiences like," Lias continued. "But eighth blackbird has shattered that myth by combining the new with the familiar, concert instruments with rock instruments, and traditional performing with engaging theatrical flair."

As the Washington Post wrote, "It's new music you can bring home to your mother."

For its Nacogdoches concert, eighth blackbird will perform Steve Reich's Pulitzer Prize-winning "Double Sextet," which features the group performing live against a recording of themselves.

The ensemble commissioned and premiered the work that the Pulitzer Prize judges described as a "major work that displays an ability to channel an initial burst of energy into a large-scale musical event, built with masterful control and consistently intriguing to the ear."

The ensemble will also perform "singing in the dead of night," a collaborative work by composers David Lang, Michael Gordon and Julia Wolfe, and choreographer Susan Marshall, which eighth blackbird describes as "a continuous weave of music and motion."

"The concert will be a once-in-a-lifetime event you don't want to miss!" Lias exclaimed.

Visit www.eighthblackbird.com to hear samples of the group's music.

Prior to the concert, Lias will give a brief lecture about the program at 7 p.m. in Griffith Gallery, located across the hall from Turner Auditorium. The audience is invited back to the gallery after the concert for a reception honoring the event's corporate sponsor, Cataract, Glaucoma & Retina Consultants of East Texas.