Guest cellist to perform at SFA 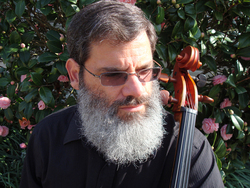 NACOGDOCHES, TEXAS - The Stephen F. Austin State University College of Fine Arts and School of Music will present Cellist Paul Christopher and pianist Elena Kuroda in a guest artist recital at 6 p.m. Friday, Jan. 29, in Cole Concert Hall on the SFA campus. Both musicians are members of the music faculty at Northwestern State University in Natchitoches, La.

The duo will perform four pieces by Jacques Offenbach, widely recognized as the creator of the French operetta, but who was also a famous cello virtuoso. The works are all wonderful examples of the composer's melodic gifts, Christopher explained.

Christopher will also perform J.S. Bach's Suite No. 1 in G major, BWV 1007 and "Resonance for Amplified Cello, Groups I - V," a piece composed for Christopher by Mark Prince Lee, chairman of the music department at Columbia State Community College in Tenn. Lee will be in attendance at t the recital.

Now serving as an assistant professor of music theory and low strings at Northwestern State University, Christopher was an adjunct member of the SFA music faculty from 1993 to 1999.

He has appeared on numerous recordings as a member of the Nashville String Machine with such artists as Faith Hill, Ricky Skaggs, Bruce Springsteen and George Strait. He has also recorded four compact discs devoted to the cello duos of Jacques Offenbach on the Human Metronome label.

Kuroda received both her bachelor's degree and master's in piano performance from Northwestern State University, where she now serves as a collaborative pianist and teaches piano. In 2004, the native of the Czech Republic was featured on Slovak Public Radio's "Ars Musica," a live interview and performance show.