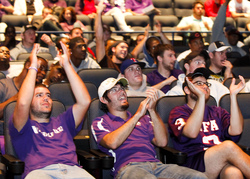 "I'm extremely excited about getting the opportunity of playing the defending national champions at our place," said head coach J.C. Harper. "In my opinion, it could be any better than having the opportunity of playing a top quality opponent, like Villanova, at Homer Bryce Stadium. This is an exciting time for Stephen F. Austin and Nacogdoches, Texas."

The game against the Wildcats (7-4/5-3 CAA), an at-large team from the Colonial Athletic Association, is slated for a 2:30 p.m. kick off Saturday, Dec. 4 from Homer Bryce Stadium, and will be televised on ESPN GamePlan. It is the second year in a row that SFA has hosted a playoff game at Homer Bryce Stadium.

The Lumberjacks won three-straight games to close out the year and earn their first outright conference title since the 1989 season. The Wildcats also enter the playoffs on a high note after knocking off top-ranked Delaware in overtime, 28-21, on the road.

Playoff tickets will go sale Monday beginning at 10 a.m. through SFA Ticket Office, and prices range from $5 - $24. Students and children's general admission are $5, while general admission for adults is $13. Reserved seats can be purchased for $16, and chair back seats are $24.

Tickets can be purchased through the ticket office at (936) 468-JACK, or through the SFA Athletics website at www.sfajacks.com.