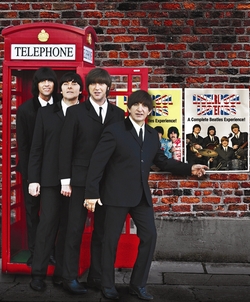 Liverpool Legends, a Beatles tribute band that headlines in Branson, Mo., will perform in concert at 7:30 p.m. Friday, Jan. 29, in W.M. Turner Auditorium on the SFA campus as part of the SFA College of Fine Arts' University Series.

NACOGDOCHES, TEXAS - East Texans can take a trip down "the long and winding road" of the Fab Four as Liverpool Legends perform a Beatles tribute show at 7:30 p.m. Friday, Jan. 29, in W.M. Turner Auditorium on the campus of Stephen F. Austin State University. The concert is a part of the SFA College of Fine Arts' 2009-2010 University Series.

The four musicians/actors who portray John Lennon, Paul McCartney, George Harrison and Ringo Starr open the show with songs from The Beatles' early years, sporting mop hairstyles and dark suits similar to the ones the "lads" wore on The Ed Sullivan Show in February 1964.

During the course of the approximately two-hour concert, the band members trace the Beatles' history, altering their physical appearances as they perform songs from albums such as "Sgt. Pepper's Lonely Hearts Club Band," "Yellow Submarine," and "Abbey Road."

Each member of Liverpool Legends was hand-chosen by Louise Harrison, sister of the late George Harrison, for the tribute band that is now an award-winning act in Branson, Mo.

Kevin Mantegna's impersonation of John Lennon is so accurate that Sir Paul McCartney, after meeting him, said, "Hey, that's you! I could spot John out anywhere! You make a great John!"

Bob Beahon has traveled the world for the last 10 years performing as Paul McCartney and receiving critical acclaim for his left-handed bass playing, attention to detail and vocal stylings.

Louise Harrison considers Marty Scott to be the very best George Harrison impersonator she has seen in the past 40 years. In fact, she was moved to tears in 2002 when she first saw his true-to-life performance as her brother.

Greg George's resemblance to Ringo Starr in both appearance and drumming style makes him one of the most sought-after Starr impersonators in the world.

Prior to the Nacogdoches concert, Dr. Richard Berry, SFA provost and professor of music, will give an informative talk on the Beatles' music at 7 p.m. in Griffith Gallery, located across the hall from Turner Auditorium in the Griffith Fine Arts Building, 2222 Alumni Dr.