Nursing is popular in Nichols household 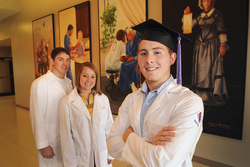 When Kellen Nichols crosses the stage during commencement at Stephen F. Austin State University, his younger siblings will be waiting for their turns to follow in his footsteps. Kellen, Kristian and Kassie are graduates of Hemphill High School and nursing students at SFA.

A high school football injury played a major role in Kellen Nichols's decision to pursue a degree in nursing from Stephen F. Austin State University. But according to his younger brother and sister, who are also nursing students at SFA, it had nothing to do with the career choices they have made.

"During my senior year in high school, I tore ligaments in my knee playing football," said Kellen, who will receive his degree during Saturday's commencement ceremony in William R. Johnson coliseum.

"I had to have two surgeries in Houston, and that really helped me make my decision," Kellen said. "I had already been considering it, because my aunt is a registered nurse and my dad had always encouraged us to go into nursing, but when I was a patient, I realized how important nurses really are."

Kellen said he originally came to SFA because he wanted t be close to home, and stayed at SFA because of the reputation of the nursing program. For Kellen's brother Kristian, the decision to enroll at SFA was a little more complicated. Kristian, now in his junior year at SFA, was offered an Academic Excellence scholarship to attend SFA, but also had football and baseball scholarship offers from other schools.

"I knew I needed to concentrate on academics in order to be admitted into the nursing program, and I knew that would be difficult to do if I was involved in athletics," said Kristian, a 2008 Hemphill High School graduate. "It was a hard decision - I had been playing baseball since I was five years old. But I knew SFA had the best School of Nursing, so I chose to come to here."


Kellen and Kristian's sister, Kassie, is a freshman at SFA, and although she is the youngest of the siblings, she said she was actually the first to decide to pursue a career in nursing.

"I decided to be a nurse when I was 12 years old," she said. "I just liked the idea of helping somebody. I guess it is kind of funny, that after so many years of me keeping up with them, Kellen and Kristian finally decided to do something I was planning on."

Kellen has a job waiting for him at Lufkin Memorial Hospital, where he will work in the progressive care unit. Since he completed his clinical rotations at Lufkin Memorial, he is no stranger to the facility. He plans to continue his education and will pursue training as a certified registered nurse anesthetist, which requires one to two years of experience and two additional years of education. Because of the instruction he has received at SFA, Kellen said he feels prepared for his career and for continuing his education.

"The SFA nursing program doesn't baby you," he said. "The professors throw a big load at you, but it's not an impossible load. They teach you how to organize, how to prioritize and, basically, just how to be a professional."