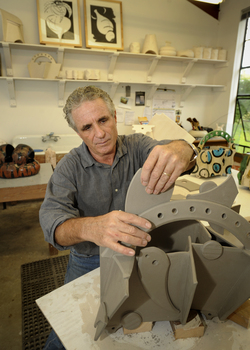 Piero Fenci, SFA professor of ceramics, works in his studio on one of the pieces included in "La Cerca," a solo exhibition that will open Thursday, July 15, in Chihuahua City, Chihuahua, Mexico.

NACOGDOCHES, TEXAS - Piero Fenci, professor of ceramics at Stephen F. Austin State University, has plenty of reasons to be excited about "La Cerca," his solo show that will open Thursday, July 15, at the state museum in Chihuahua City, Chihuahua, Mexico.

For one, the exhibition, which includes 24 ceramic pieces, a 5-foot-by-9-foot drawing and several smaller drawings, is the culmination of two years of work, both on the art and in negotiations with the museum officials.

All of the works in some way or another deal with defense strategies, and so Fenci chose the Spanish translation for "The Wall" as the exhibition's title. "We build these elaborate structures that give us a sense of safety and protection, but the fact is, they're all futile."

"I feel so fortunate to have been given this opportunity to exhibit my art at the museum," Fenci said. "I think I may even be the first American ever to have been invited to do so."

Fluent in Spanish, Fenci had long desired to teach in a Latin American country, and when an opportunity to serve as a guest lecturer in Chihuahua presented itself, the artist eagerly agreed. Once there, he discovered there was no ceramics program, so he began building one.

Fenci continued his relationship with the Mexican university, and two of the students, Adan Saenz and Kira Enriquez, followed him to SFA to continue their studies with their mentor and to earn their master of fine arts degrees, the highest degree in their field.

Saenz is now head of the Chihuahua university's ceramics program, which has expanded to include a graduate degree, and Fenci continues to offer assistance. During a visit last November, he supervised the construction of a high-fire, down draft kiln he designed, the only one of its kind at a university in northern Mexico.

Fenci sees his exhibition in Chihuahua City as a capstone to the work he began in the area six years ago. Through the medium of clay, he has helped build a bridge, not a wall.

"La Cerca" will run for three months, closing in mid-September. Fenci's work will be included in the upcoming "SFA Faculty Show," which will open at The Cole Art Center @ The Old Opera House in downtown Nacogdoches on Friday, Sept. 10.